Growing up in the 80s I first became aware of Bruce Willis from the TV series Moonlighting, in which he played LA gumshoe David Addison. After seeing Die Hard (around age 14) I became a die hard fan like most people who saw it. Many of my after school hours were spent watching the movie over and over and memorizing the dialogue from “Hans Buby” to “Yipee-kiay motherfucker” to “Now I know what a TV dinner feels like” and on and on. I think I watched it so many times it became part of my film geek DNA. 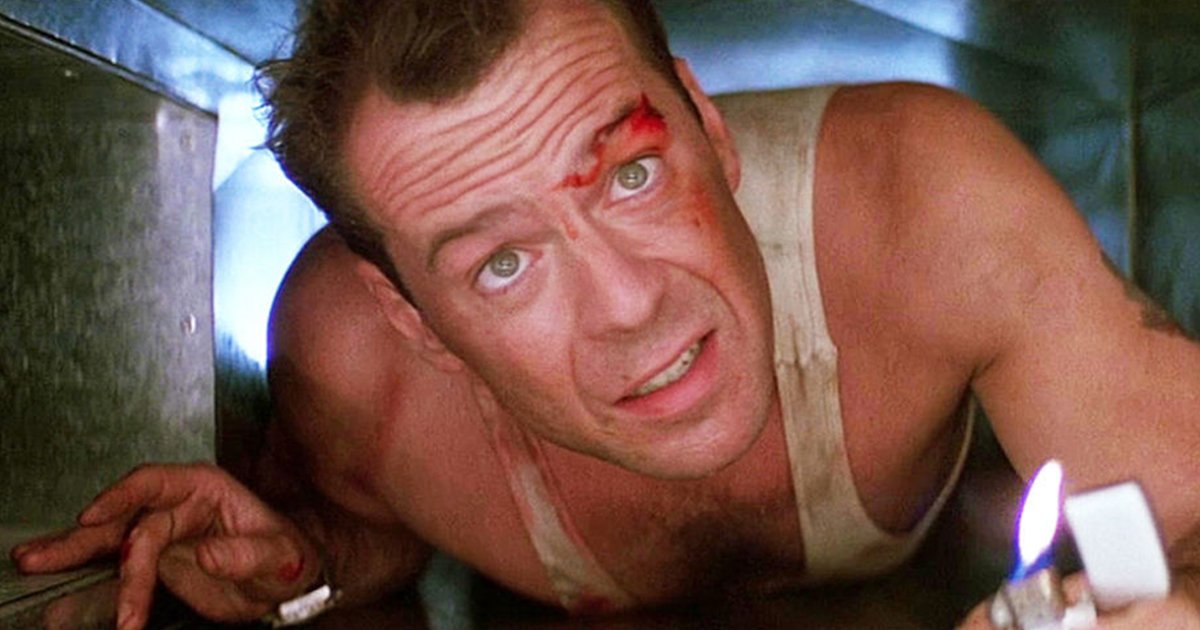 Many people still ask the question: Why did Die Hard become such a smash success? Well, I think one reason was because it came out right at the height of the popularity of all the Hollywood action cinema of the 80s. Of course the other is it was the brilliance of how the film played to audiences thanks to a great script (by Steven E. De Souza and Jeb Stuart) the direction and cast. Looking back now, Bruce Willis being chosen for Die Hard could be compared to Robert Downey Jr. being cast in Iron Man. Not exactly who you’d expect since both were known mainly for lighter comedy fare, but that aspect may actually be one of the most important parts of why the movies became so huge. The humor factor makes them both so relatable and fun to watch. 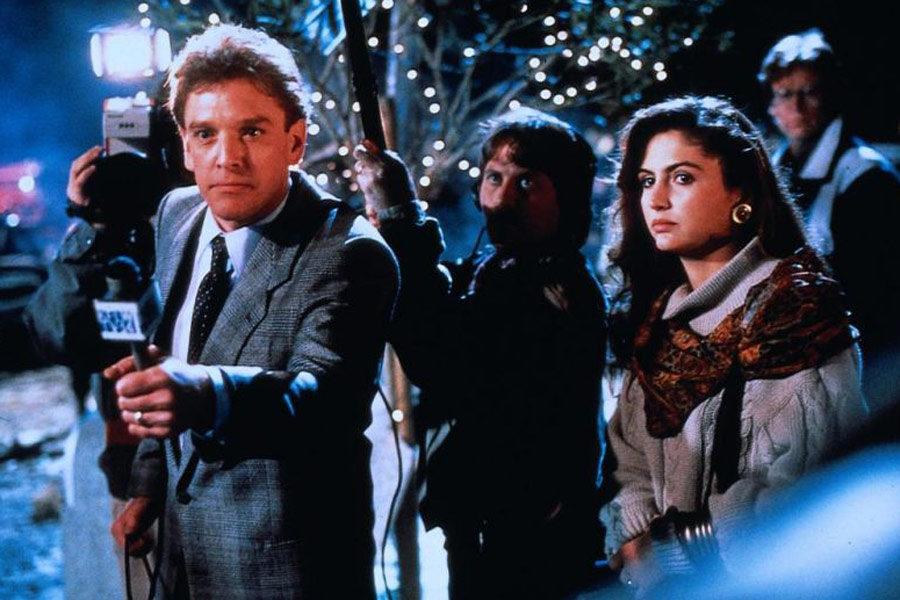 Die Hard was based on the novel Nothing Lasts Forever by Roderick Thorp. It was a sequel to the novel The Detective which had been made into a film and starred Frank Sinatra. Sinatra was initially offered Die Hard due to a contractual obligation at Fox who owned the rights but he didn’t want to do it. After that it was pitched to Arnold Schwarzenegger who turned it down as well. The studio then went to several other stars that passed on it. Bruce Willis, who was then a popular TV actor, was hired against the studio’s wishes. Noone knew at the time what would happen when the film was finally released. 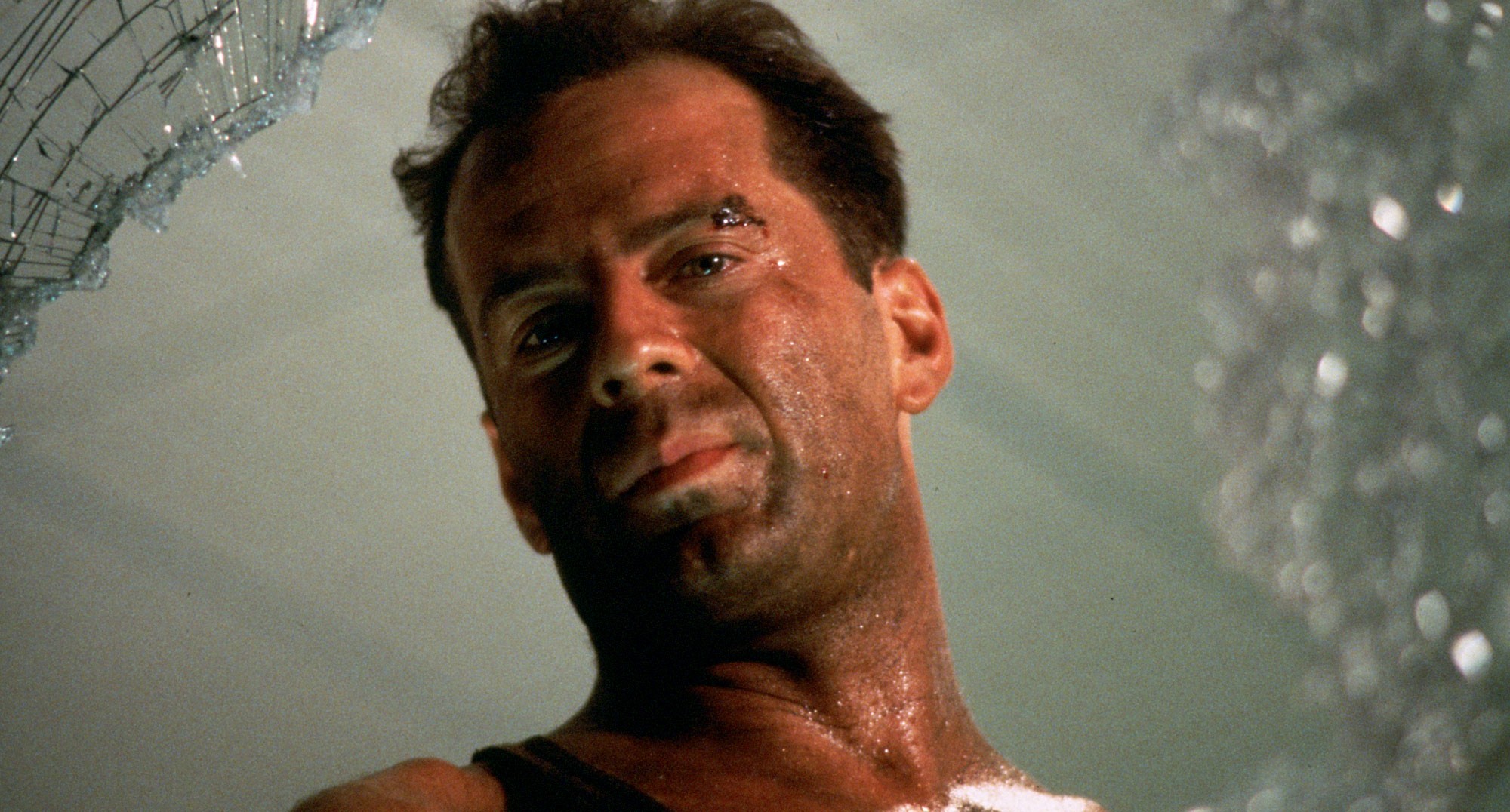 During Christmas, New York policeman John McClane (Bruce Willis) is arriving in Los Angeles where he’s been invited to a special party being held by Mr. Joe Takagi (James Shigeta) at the newly built Nakatomi Building where his wife Holly (Bonnie Bedelia) works. John is in a bit of a quandry because he loves his wife but she took her job and left him behind, so they’ve been estranged from each other. John arrives at the airport and is taken to the party by limo driver Argyle (De’voreaux White) an affable young black man who gives the film a bit of its hip hop vibe. After arriving at the building, John notices Holly has been using her maiden name at her job. This just increases the tension when he sees her and is introduced to the other employees. One of them is Ellis (Hart Bochner), a weaselly asskisser (one of the funniest/best characters in the film) who is indulging in a little nose candy. 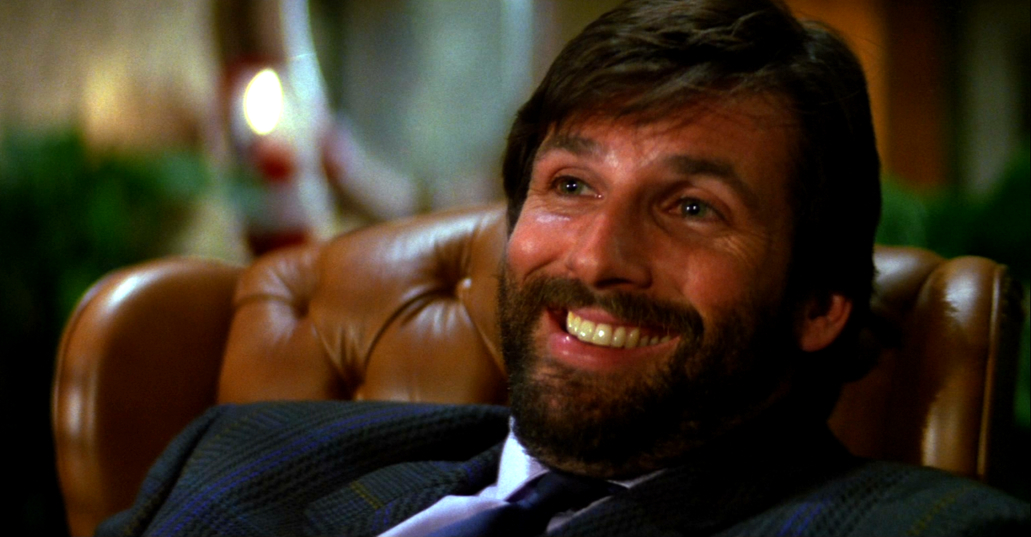 As John washes up and gets dressed in in Holly’s office, some other uninvited guests arrive at the Nakatomi Building. They are criminal mastermind Hans Gruber (Alan Rickman) and his gang of Euro-thugs. These guys immediately hijack the entire place and hold Mr. Takagi and the other guests hostage. Their main objective: the password to the highly secured vault which holds a large quantity of bearer bonds and other expensive items. John overhears the commotion outside and is able to quickly duck out and hide in the vacant floors above the business office. Hans searches for Takagi and interrogates him in order to get the password to the vault. Being a very proud man Takagi refuses to give up the code and is coldly executed. This drives the entire place into a frenzy, they can see Hans really means business.

The action and thrills increase moment to moment as McClane uses his wits and tactical skills to thwart Hans’ plans. He doesn’t receive any help until he gets the attention of Sgt. Al Powell (Reginald VelJohnson) an L.A. police officer who is called to check out the Nakatomi building following McClane’s distress call. After a very explosive introduction, the two become fast friends since they’re both average beat cops and family men. Al proceeds to act as McClane’s virtual partner as he fights off Gruber & Co’s attacks as long as he can before the cavalry arrive in the form of special FBI agents. These guys don’t help much and really do more damage than anything. 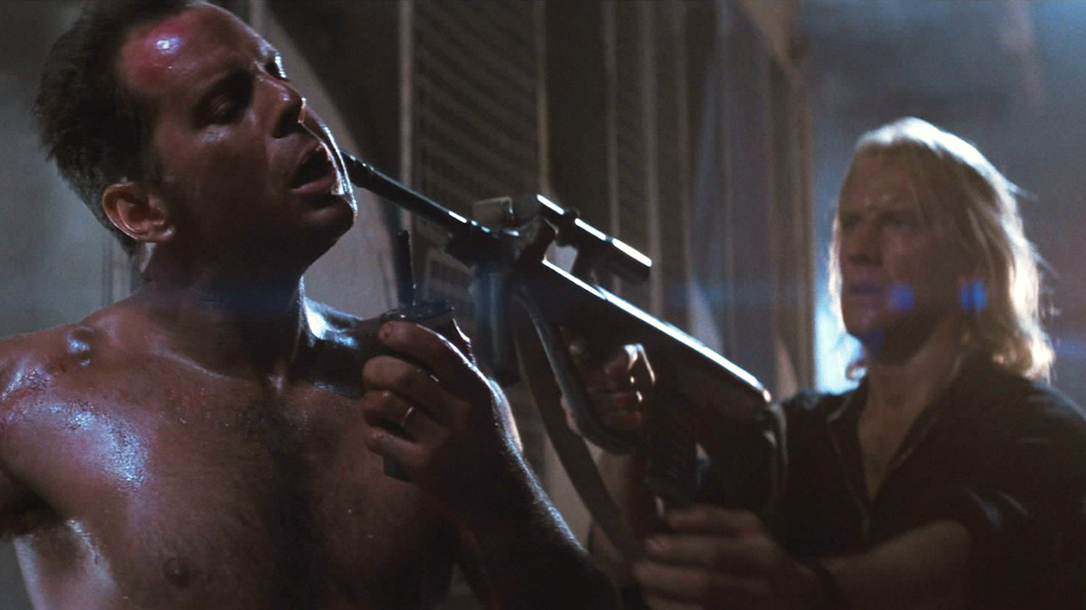 What makes Die Hard so entertaining is the streamlined plot which basically takes the classic rebel cop vs bad guys concept and puts it inside a single structure. This created a perfect way to take the characters off in different directions but still maintain the overall momentum. Hans’ men become obstacles that McClane must get through over the course of the running time with the diabolical baddie Gruber saved for the very end. 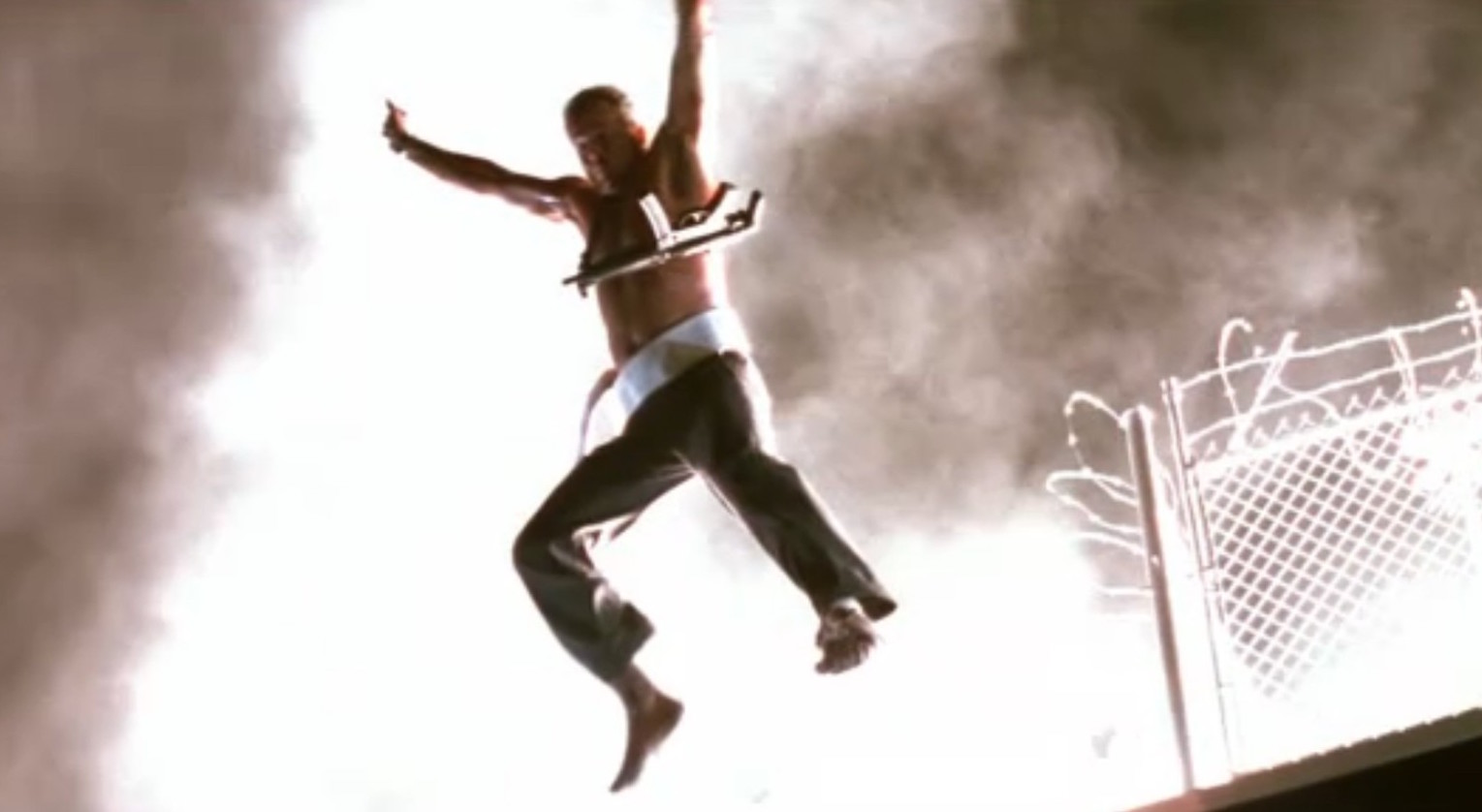 In a cool post-modern discussion via walkie talkie the irritated Gruber surmises McClane is a guy who grew up watching too many John Wayne movies and is living out his fantasy by fighting back. McClane wryly retorts that his favorite cowboy actually wasn’t John Wayne but the often overlooked Roy Rogers then utters the classic catchphrase “Yipee Kiay Motherfucker”. It’s these smaller moments in between the big action spectacle where the film really shines and Willis makes us connect to McClane. 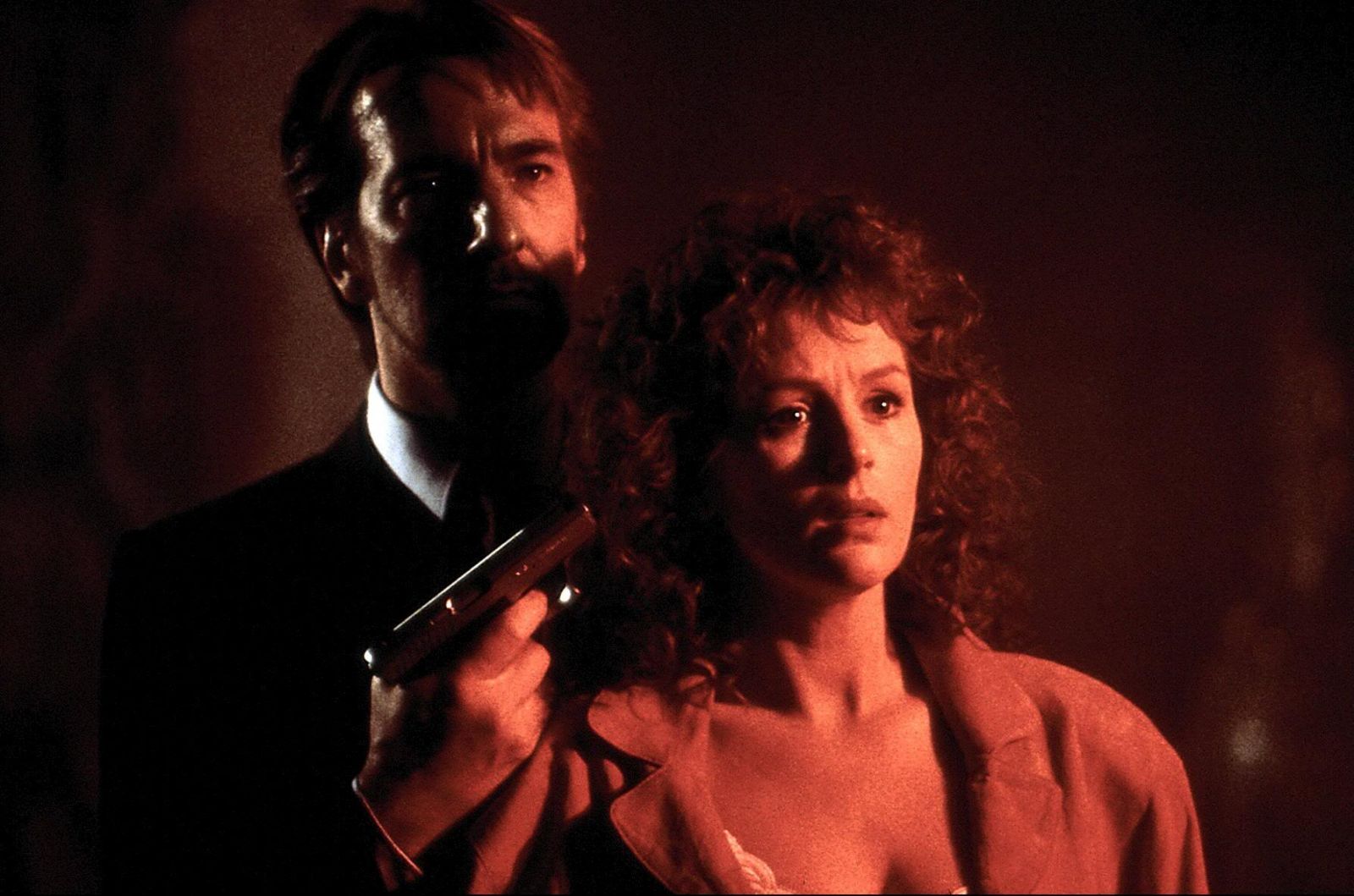 Die Hard was made for only $28 million and earned over $140 million worldwide. The film was nominated for four Academy Awards: Best Sound Editing, Best Film Editing, Best Sound Mixing (Don J. Bassman, Kevin F. Cleary, Richard Overton and Al Overton, Jr.) and Best Visual Effects. Following its massive global success several sequels were made, Die Hard 2, Die Hard With a Vengeance, Live Free or Die Hard and the latest installment A Good Day To Die Hard. While most of these are solid films in their own right, the original will always remain the best. It’s become a truly timeless classic of Hollywood cinema and a benchmark in the action genre. 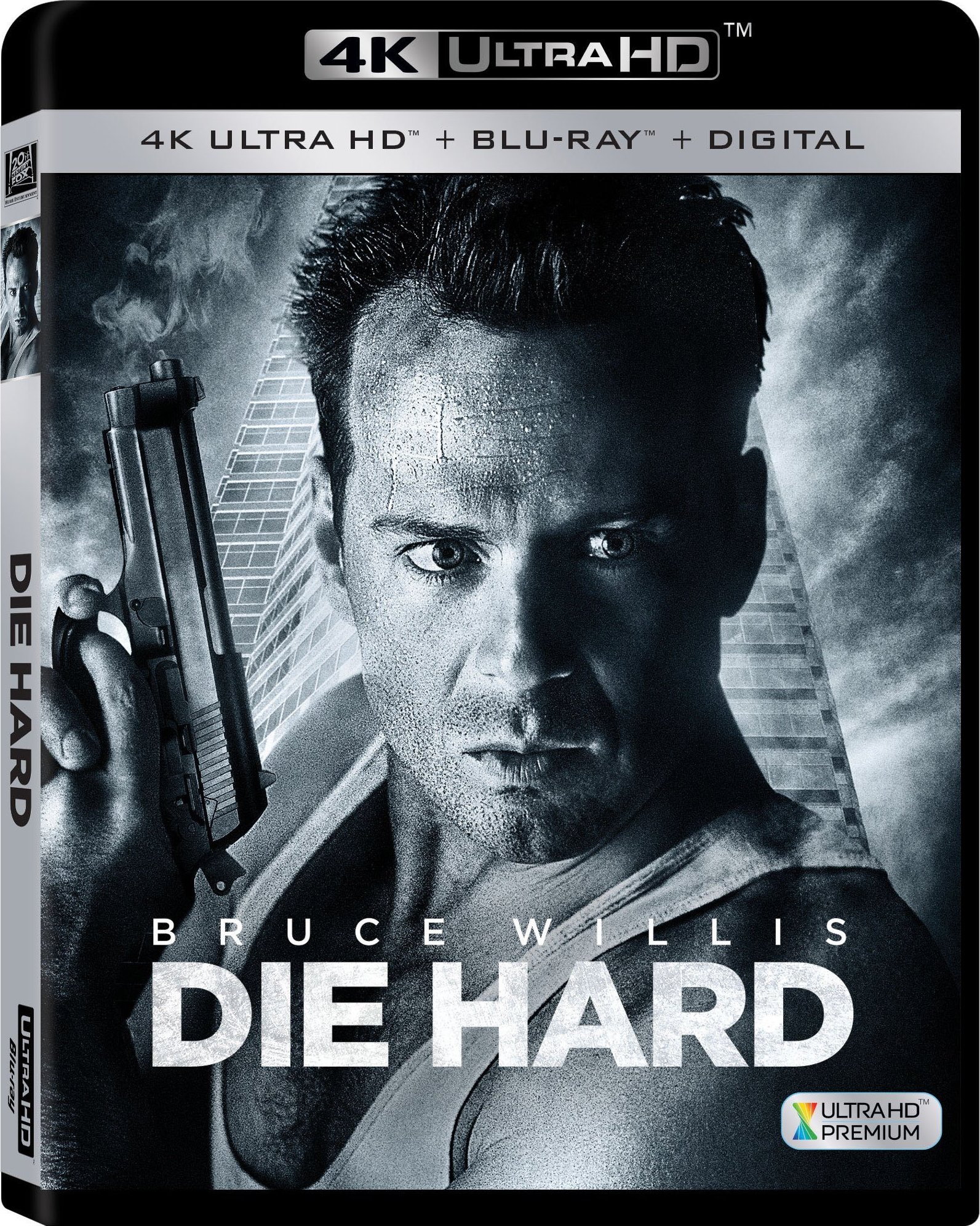