FILM NOIR: The Dark Side of Cinema

On May 24th, Kino Lorber will be releasing FILM NOIR: The Dark Side of Cinema on BluRay. The box set features five hardboiled crime classics from the 1950s. BUY FROM AMAZON

Big House U.S.A. (1955, 83min) – Extortionist Jerry Barker (Ralph Meeker) accidentally comes upon a runaway child and uses the opportunity to take the boy and demand a ransom. After collecting the money, Barker flees when he discovers the boy has accidentally fallen to his death. The FBI becomes involved, and Barker is apprehended, but without a body, he’s only sentenced for extortion. In prison, Barker is placed with hardened criminal Rollo Lambert (Broderick Crawford), who plots a breakout to get the hidden ransom.

A Bullet for Joey (1955, 85 min.) – Edward G. Robinson and George Raft star in this espionage thriller that pulls out all the stops for excitement and edge-of-your-seat suspense. When a Canadian police inspector investigates a murder, he is hurtled into an adventure involving foreign spies, American gangsters and an explosive high-tech secret that could change the world. In a daring attempt to seize a brilliant physicist’s discoveries, a foreign superpower enlists mobster Joe Victor (Raft) and his gang in a scheme that will ignite a firestorm of betrayal, murder and global intrigue. Police Inspector Leduc (Robinson) is closing in, but the gangsters bring in their ultimate weapon: the stunning Joyce (Audrey Trotter), a blonde temptress who will teach the scientist a thing or two even he doesn’t know! The breathtaking chase leads through the city streets to a pulse-pounding confrontation aboard an enemy cargo ship. Crackling with unrelenting tension, clever twists and a rapid-fire pace that will have you enthralled until the final action-packed moments, A Bullet For Joey is an adventure of the highest caliber with top-notch direction by the great Lewis Allen. Mastered in HD!

He Ran All the Way (1951, 79 min.) – Nick Robey (John Garfield) is a dim-witted thug who lives with his mother and scrapes by on petty crime. He and his slick accomplice plot a big-time payroll robbery, but their plan goes horribly awry when they’re discovered by a uniformed policeman, a shootout ensues leaving Al and the cop wounded and Nick on the run. While seeking cover, Nick meets Peggy Dobbs (Shelley Winters), a lonely young girl who takes Nick to her family’s apartment, while there the paranoid thief decides to take the family hostage until he can escape. This was the great John Garfield’s final film as he died less than a year later at age thirty-nine from heart complications. Stunning black-and-white cinematography is provided by the legendary James Wong Howe.

Storm Fear (1955, 88 min.) – Storm Fear is a classic film noir starring, produced and directed by Cornel Wilde as a wounded bank robber, Charlie Blake hiding out with his gang at his brother, Fred (Dan Duryea) and sister-in-law, Elizabeth’s (Jean Wallace) farmhouse during a snowstorm. As time passes the criminals are anxious to move on, but need to rest so Charlie has time to recover, complicating matters more is Charlie’s love for Elizabeth with whom he once had an affair.  The stellar supporting cast includes Lee Grant, Steven Hill and Dennis Weaver – with an adapted screenplay by the great Horton Foote and stunning black-and-white cinematography by Joseph LaShelle.

Witness to Murder (1954, 83 min.) – A woman fights to convince the police that she witnessed a murder. One sleepless night, Cheryl Draper (Barbara Stanwyck) witnesses a young woman being strangled to death in an apartment across the street. She reports the killing to the police, but when the police arrive there’s no body to be found. The policemen are convinced that Cheryl probably dreamt the murder and leave ignoring her pleas. Similar to Alfred Hitchcock’s Rear Window, which opened less than a month later and overshadowed this top-notch film noir featuring great direction by Roy Rowland and beautiful black-and-white cinematography by legendary John Alton. 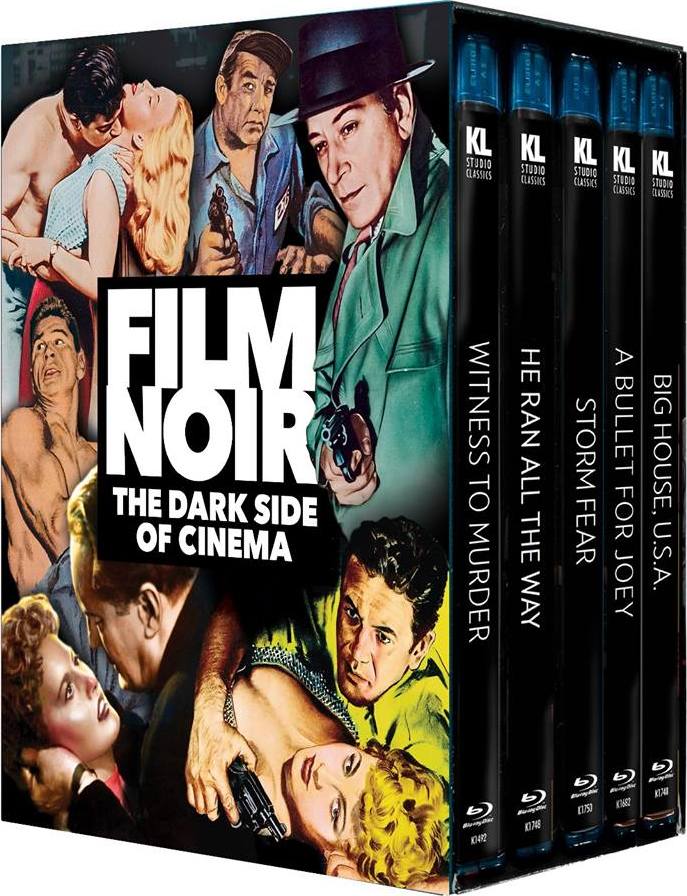