Deadicated To George A. Romero: NIGHT OF THE LIVING DEAD

As if 2017 couldn’t get any grimmer, we just lost George A. Romero. Personally, it feels like I lost someone who had been one of my friends for a long time since I’ve seen his films such as the original trilogy of the Dead and The Crazies. Moreover, he’s one of my all-time favorite directors since most of his works have not only gore and violence, but also a sharp social commentary. He combined two different aspects into single movies that you can either watch for fun or to study the dark side of humanity. For this whole week at FC we are going to look back at his original Trilogy of the Dead as well as two other films that are not zombie films. So how will we begin this tribute? There could be nothing better than beginning with his 1968 classic Night of The Living Dead. 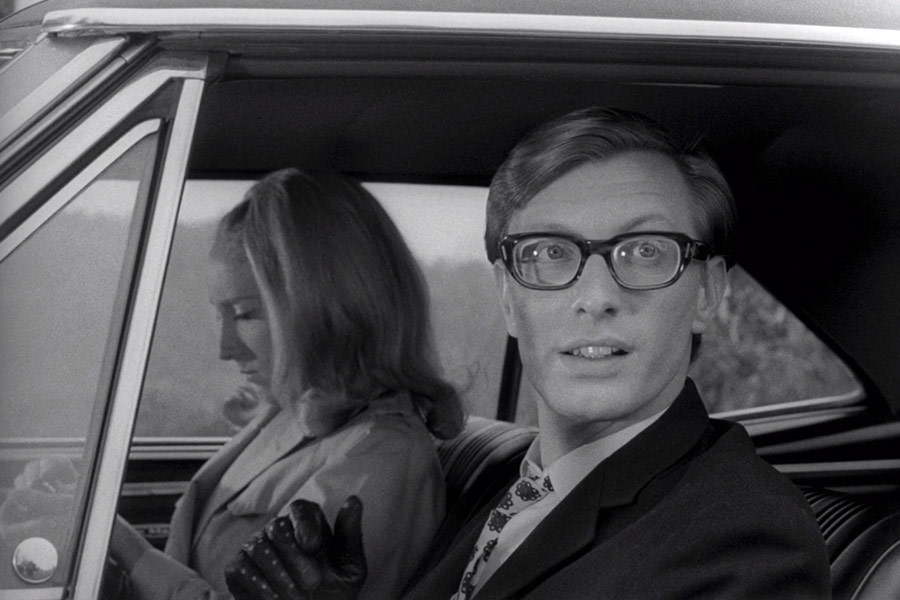 NOTLD has become one of the most famous horror films for several reasons. First off, it’s the first movie that set the standard for the term “Zombie”. Before 1968, there had been some zombie films out there like White Zombie or the infamous Ted V. Mikels’ The Astro Zombies, but monsters in those films looked totally different from what we know nowadays (we’ll talk about this soon). Moreover, the fact that NOTLD is in the public domain easily raises awareness among non-horror audiences since many TV stations air it on Halloween every year since it costs $0. This might sound good for TV watchers and owners of the stations, but NOT for the filmmakers. Actually, this film was going to be called “Night of The Flesh Eaters”, unfortunately, there was a film called The Flesh Eaters already released years before, so George had to change his movie’s name to avoid any confusion. There was only one problem…the title that they submitted for copyright registration is Night of The Flesh Eaters not Night of The Living Dead. So, technically, this cult classic has been in the public domain since it hit the theater! That’s why NOTLD is one of the most well-known Horror films that never made a lot of money for George the way it should have.

So what about the plot that captivates us? It takes place in one night. The film begins at 8pm when siblings Johnny (Russell Streiner) and Barbara (Judith O’Dea) visit their relative’s grave. Suddenly, a mysterious man attacks Johnny so Barbara runs away from the cemetery and stays in an “abandoned” house. There’s a reason why I put quotation marks there because she’s not alone. There’s Ben (Duane Jones), a smart Black guy who just arrives at the house to stay away from the monsters. And then there’s Harry (Karl Hardman) and his family who are hiding out in the basement. Instead of sticking around and beating the hell out of the zombies together, Ben and Harry continually argue about whether they should stay in the basement or remain upstairs to guard the doors and windows so they can watch the news. 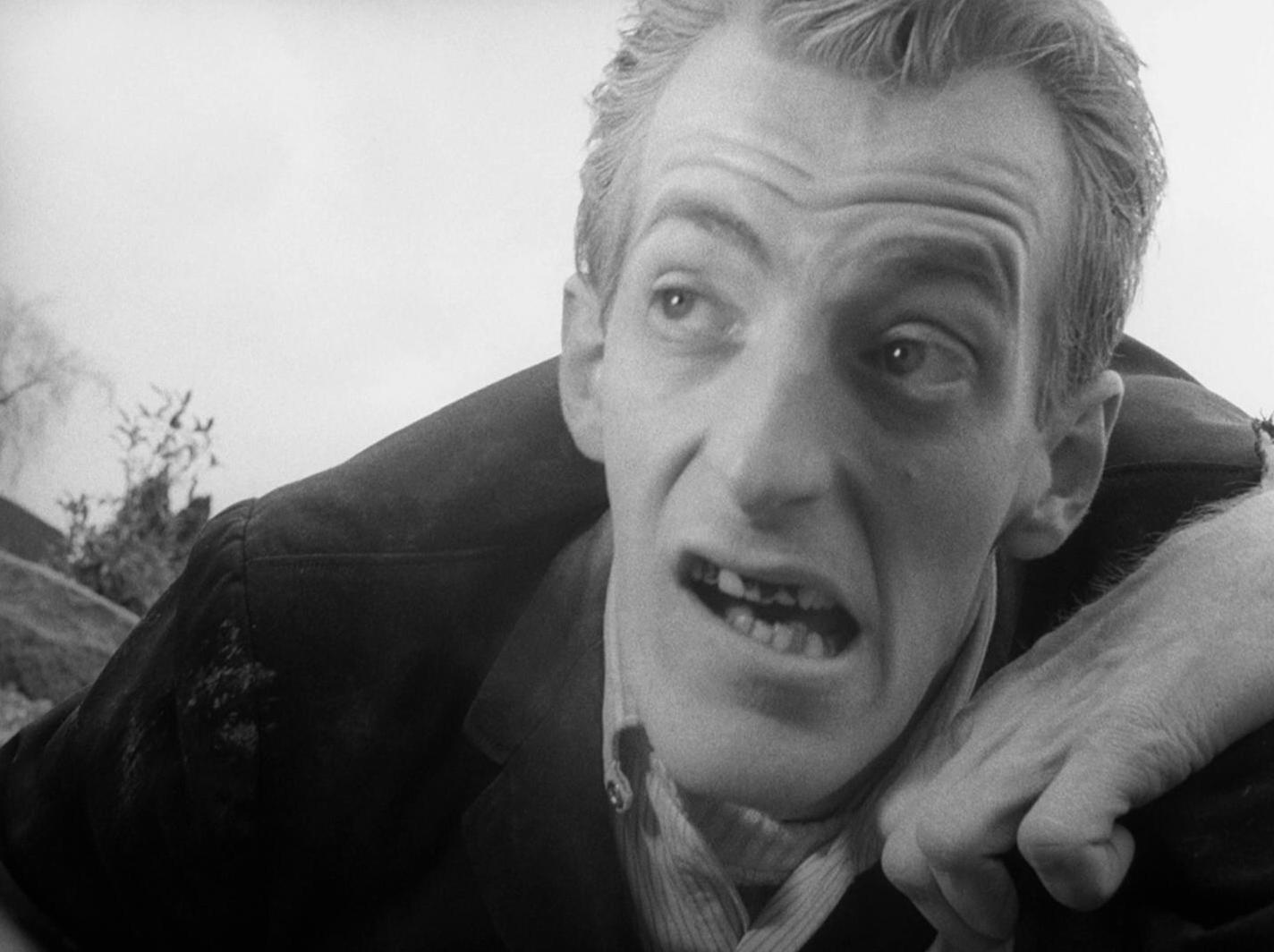 This leads us to the main theme of the movie: Who’s in fact scarier? The monsters or the humans? To me, the strongest point in this film is characterization. Each character has their own beliefs and it’s our task to justify their acts.

Barbara: I see many people who are annoyed by her erratic behavior, but there’s an explanation for that. She’s in shock. That’s why she doesn’t help her brother when he is attacked by the zombie and remains either speechless for a while or constantly rambling about going to help him. Her mental state is beyond broken.

Ben: He’s the smart guy who believes that sealing doors and windows are a surefire way to protect them from the zombies. He thinks that doing it this way the survivors can still get news on the radio or TV. Later on, he decides to take everyone to a rescue center.

Harry: A stubborn middle-age man who sticks to his guns and chooses to stay in the basement because it sounds safer to him to be there than go out anywhere or stay on the ground-level of the house. He always fights Ben on many issues. 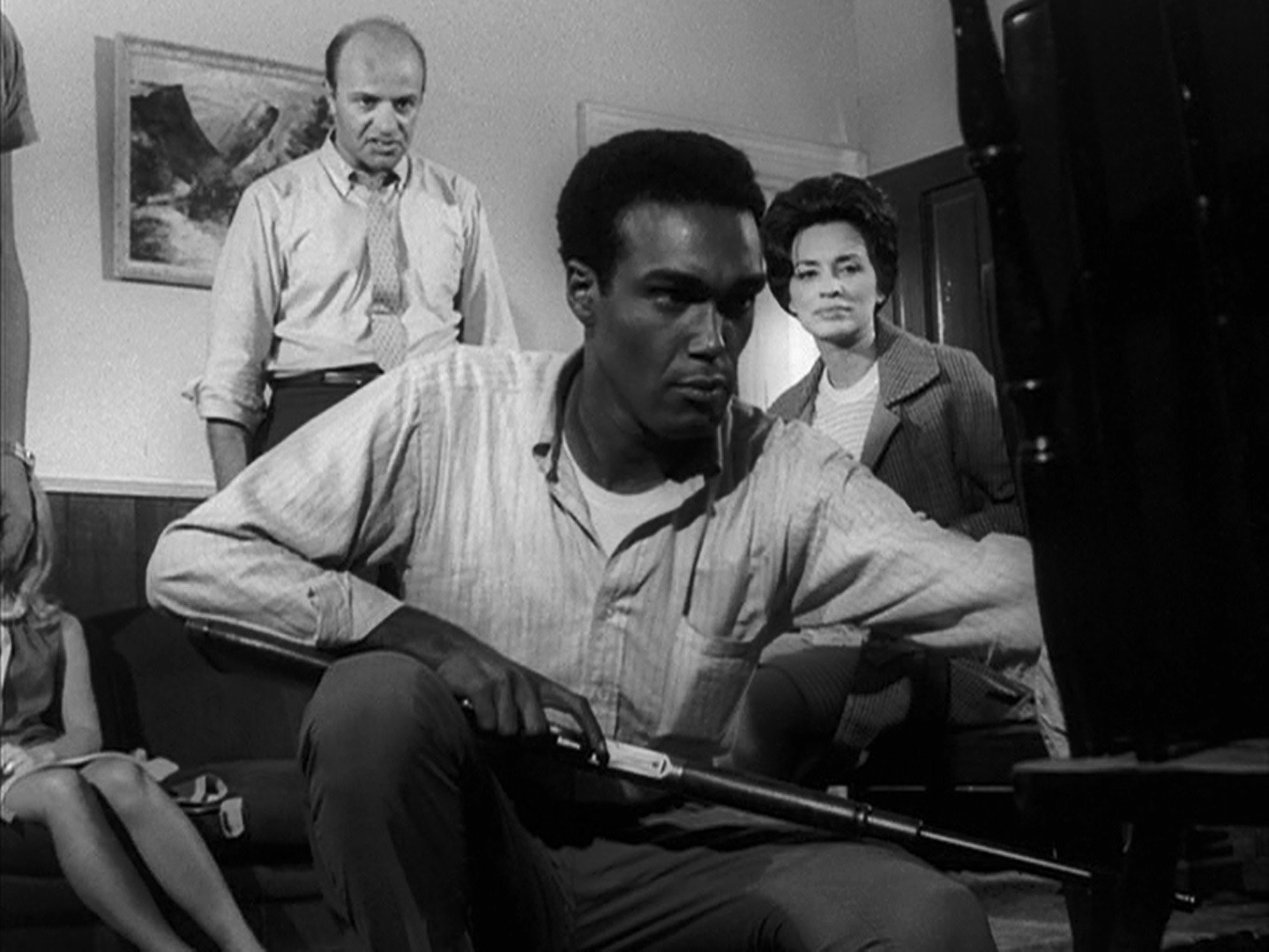 So whose theory works better? Well, while many people agree with Ben, they forget that the tragic ending happens because he doesn’t stay inside the basement. Who knows? If Ben stayed there, he might’ve got rescued by the sheriff and his men. That’s right, our hero doesn’t get killed by the creatures, it’s humans who kill him. Many critics interpreted this scene as a message on racism around that time. It could be, but on the other hand…Duane Jones, the actor who plays Ben, got the role not because of his skin color, but because he’s the only actor who showed up for casting. Also, the night NOTLD premiered was coincidentally the same day that Martin Luther King Jr. was shot. So, to sum up, the film’s message isn’t really about race, but due to events surrounding the film it became a product of its time that echoed problems African-Americans faced at the time.

Another message in this film is confusion in the chaos. Nobody even knows what’s making these dead corpses come back to life. There’s only vague rumors on the news that it MIGHT be because of “a mysterious high-level radiation” that came from a satellite. Moreover, news outlets warn civilians in a ridiculous way. When our main characters turn on the radio it states to “stay indoors at all costs”. But sometime after that, the TV station says the rescue center is a better place to go and hiding in your house is not the safest place anymore. I mean, who are we supposed to believe? In the day and age when everyone tries to be an expert, sometimes it’s hard to find one person who says the smartest thing and leads us to survive. 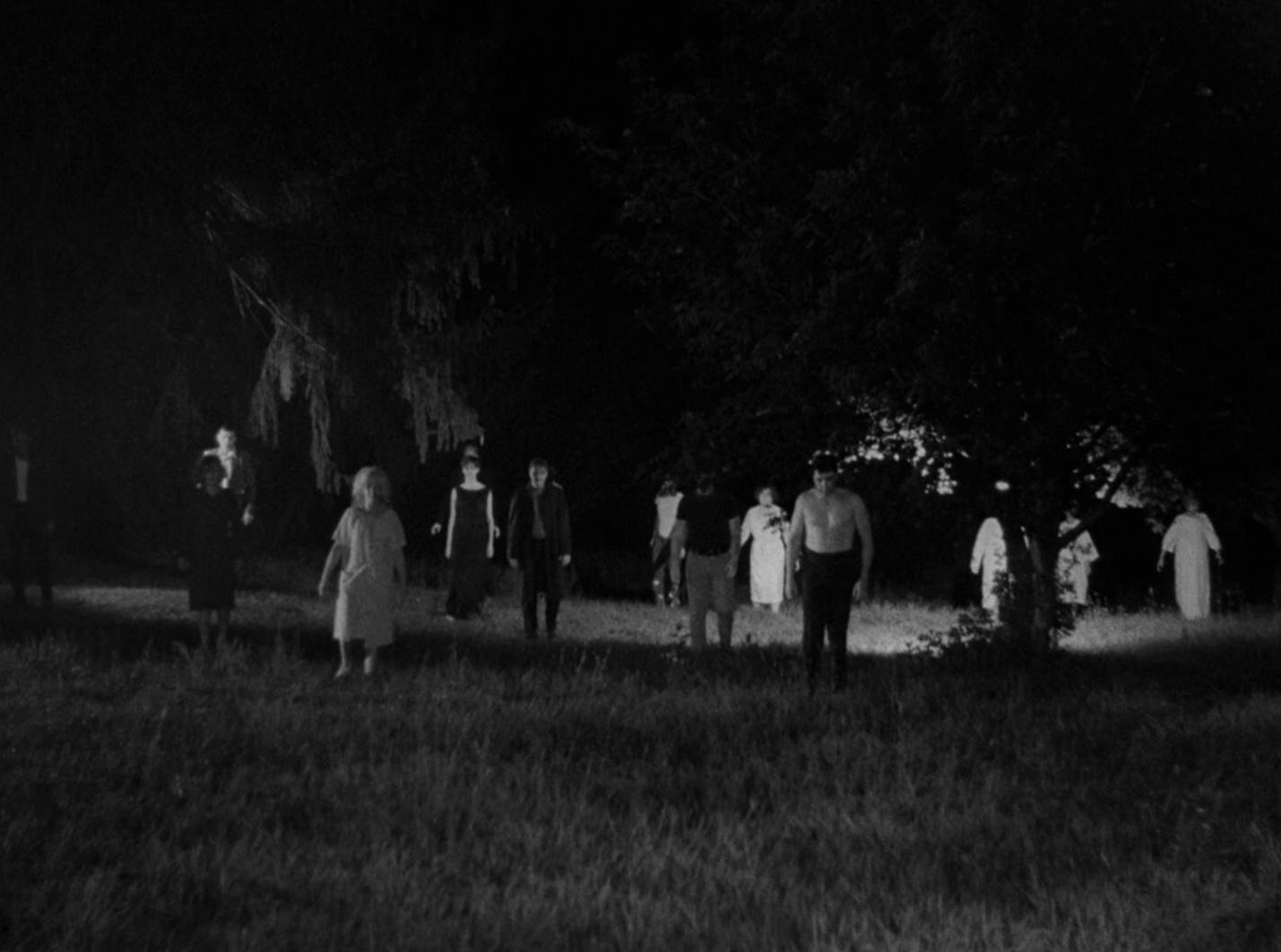 As I pointed out before, this is the first zombie film that sets up the “Shoot the head” rule that we all now know, although there are things that make them different from the sequels. Here’s what Ben says…

“Anyhow, that’s where I found that truck I have out there. There’s a radio in the truck. I had jumped in to listen to it when a big gasoline truck came screaming right across the road. Well, there must have been 10-15 of those things chasing after it. Grabbing and holding on. Now, I didn’t see them at first. I could just see that the truck was moving in a funny way. And those things were catching up to it. Truck went right across the road. Slammed on my brakes to keep from hitting it myself. It went right through the guard rail. I guess… I guess the driver must have cut off the road, into that gas station by Beekman’s diner. It went right through the billboard. Ripped over a gas pump, and never stopped moving. By now it’s like a moving bonfire. Didn’t know if the truck was going to explode or what. I can still hear the man, screaming. This thing is just backing away from it. I look back at the diner to see if there was anyone there who could help me. That was when I noticed that the entire place had been encircled. Wasn’t a sign of life left, except…by now, there were no more screams.”

As you can see, the zombies in this film are strong enough to flip a car or wreck a door. It contradicts the weaker zombies that we’ve seen before…and there’s a reason for that. NOTLD takes place on the third night (according to the radio that says “This whole ghastly story began developing two days ago”) in which the epidemic began, while Dawn of The Dead happens three weeks later. By that time, the zombies’ brains have already rotted to the point that they have little to no strength and only remember the places they went before they were infected. We’ll focus more on this topic next time.

In conclusion, don’t expect this to be a total gore-fest. It’s still a thrilling horror film due to effective lighting, a brilliant script, and the fact that we have no idea how many zombies are out there, while our heroes try to plan how to survive it. Night of The Living Dead is the kind of horror film that you can show to your kids and teach them about the key message as well. Don’t only judge it based on the Black-and-White color, just watch it! Highly recommended! 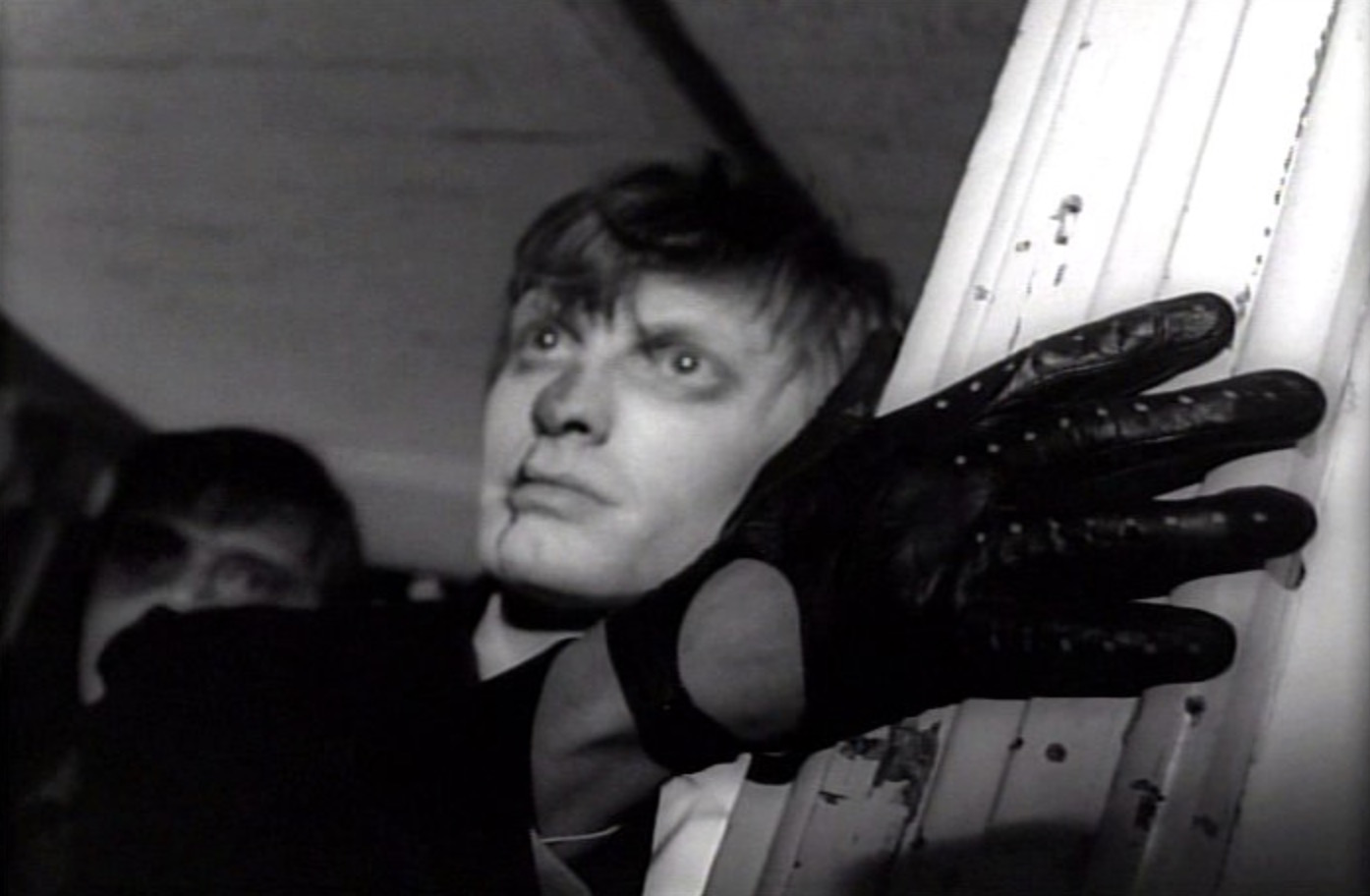 Next time, I’ll talk about the legendary sequel that kickstarted the zombie trend in exploitation films and explored a larger social theme. Stay tuned.

NOTE: There was a remake of NOTLD in 1990. It’s directed by Tom Savini and totally worth watching, even if you know how it’s going to end because this remake is plays like “You think this is what’s going to happen? Now watch this!”.