Being a huge fan of cinema of the 1970s, I love discovering new films that have slipped past me. Peter Hyams‘ 1974 crime classic Busting (his first!) was one that I thought I saw years ago but after watching it recently, I realized I actually hadn’t seen it at all. The movie stars Elliot Gould (The Long Goodbye) as Keneely and Robert Blake (Electra Glide in Blue) as Farrell, two hardboiled Los Angeles vice cops. The movie begins with them working on several small standard cases slinking around all the seedy joints and back alleys in town looking for criminals to arrest. Their hangout is a grungy public bathroom where they go over their daily plans and of course noone would notice them there. The story then switches gears when they set their sights on taking down a big crime boss named Carl Rizzo (Allen Garfield) that is behind most of the various scams they have attended to. Garfield is one of my favorite actors from the 70s and he plays his slimeball character perfectly. As Keneely and Farrell do their jobs the best they can and try to rise above it all, there’s a slow realization that criminals like Rizzo can and will get away with breaking the law due to the corruption that is there at every turn. Gould and Blake are superb as the frustrated flatfoots that bring to mind characters in the same vein like Popeye Doyle from The French Connection (1971).

While watching Busting I was reminded of another favorite film of mine from the same year Freebie & The Bean which starred James Caan and Alan Arkin. Come to find out, it was actually delayed so it wouldn’t have to compete directly with Busting since they were so similar, both focusing on two misfit cops and their rocky relationship while on the job.

Busting is really a dusky gem, filled with that cynical, un-PC, sleazy atmosphere many movies of the era had. It features great acting, memorable action sequences like these crazy shootouts filmed via tracking shots and an ambulance chase that is so damn exciting. In closing, I’m really happy to say that Busting is now been added to my favorite films of the 70s! 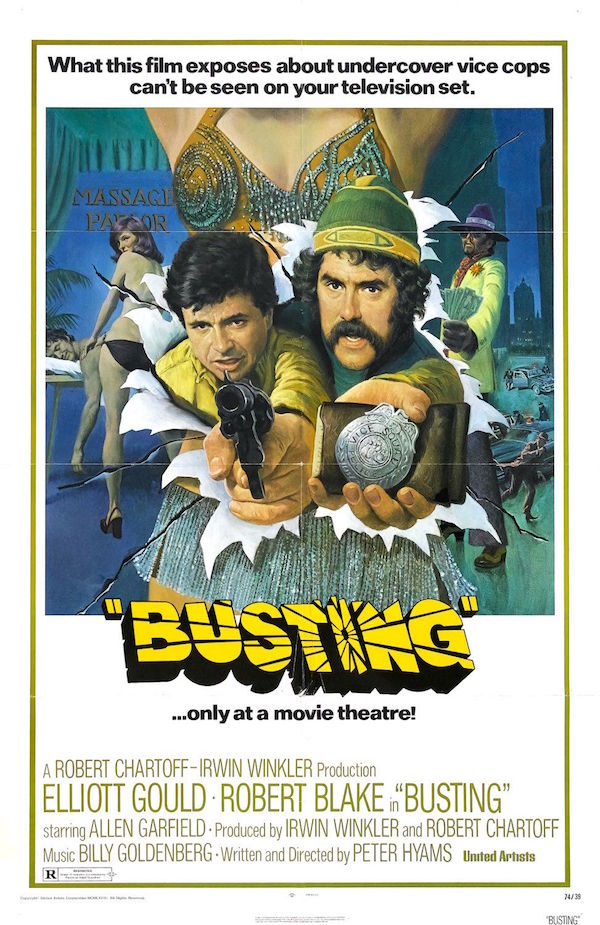