One of the most highly rewatchable films from the late 1980s is Rowdy Herrington’s Good Ol’ Boy action film ROAD HOUSE (1989). I remember seeing the preview for this film back at my first theatrical viewing of Tim Burton’s BATMAN. I wasn’t too impressed by Road House’s trailer at the time since I had been over-saturated with Swayze from the smash hit Dirty Dancing (1987). It did have a few laughs, especially Swayze’s “Be Nice” monologue which was inter-cut with the action scenes.

It’s been almost 30 years since the film came out and it appears on cable TV seemingly every week. Now, many people may think this film is a minor work in the big scheme of cinema, but to me its a really entertaining genre film that I’ve watched numerous times and I can’t seem to get tired of. In my book, when there’s a film you can watch over and over and over again, it should be considered a good film regardless of it’s critical status. Some may call this one a guilty pleasure, but hey, I dig it.

ROAD HOUSE tells the story of a cooler (head bar bouncer) named James Dalton (Patrick Swayze) (he is only referred to as “Dalton” in the film) who we meet at the beginning of the film working at a club in what looks to be New York City. Enter Frank Tilghman (Kevin Tighe) A bar owner from Jasper, Missouri who has recently come into a large sum of money and wants to redesign his club, “The Double Deuce” into a more respectable place. His first choice for the cooler is Dalton, who seems to be something of a legend to the people in the bar business. Tighlman meets Dalton right after a small bar fight in which Dalton gets cut on the arm by a drunk patron who thinks he can whip Dalton’s ass. Right from the start we see that to Dalton, this job is just business and not personal. Tighlman offers Dalton a large sum of money to work for him, Dalton agrees, but on one condition: he runs the show, no-one else and when the jobs finished he walks. Tighlman happily agrees and Dalton quits his NYC job and heads to Jasper after giving his car keys to an old wino on the street.

When Dalton arrives in town, we can see that the Double Deuce is a true roadhouse bar. It looks like a slaughterhouse from the outside and when Dalton gets inside, the place is as hillbilly as you can get, complete with chicken-wire around the stage. Everyone in there is either looking for trouble, fighting or drunk off their ass. One thing lightens the mood Dalton is in, and thats when he hears the music coming from the stage. It’s his old friend Cody (Jeff Healey) a good guy who’s a great singer of Blues and Classic Rock. He’s also blind, but he doesn’t let that stop him. While Dalton takes in the goings on, he meets Carrie Anne (Kathleen Wilhoite), a slightly goofy waitress who asks Dalton who he is. It takes alot of effort but when she finds out she lets him know, shes heard of him. A sexy blonde named Denise (Julie Michaels) also spots Dalton and she begins to hit on him throughout the film, but Dalton isn’t interested in cheap women like her.

Jasper is run with an iron fist by one man, Brad Wesley (Ben Gazzara). Wesley is a downright evil bastard. Take the meanest spoiled rich kid you ever saw, now multiply that by 100. This guy does whatever he wants and if anyone gets in his way, they either disappear or get beat down so hard they don’t do it again. Gazzara is perfect in the role of Wesley, he has that smile that just says “I love being bad”. Watch for one particular scene where Wesley is driving down the street singing a Frank Sinatra tune.

After Dalton surveys the mess known as The Double Deuce he begins looking for a new car and finds a nice old Mustang with really cool headlights that open and close. Then he goes to an old farm on the river, where he meets Emmett (“Sunshine” Parker), a white haired good ol’ boy farmer that offers Dalton a nice apartment placed conveniently over his horse barn. Dalton takes the place and moves in and we can see he’s right at home as if he lived there for years. What Dalton doesn’t know is that Brad Wesley’s mansion is directly across the river from him. Bad news if you’re an honest bar bouncer in a corrupt town.

Dalton takes a trip down to the local auto parts store where he meets Red Webster (Red West of Elvis Presley’s Memphis Mafia). Red is an honest man, but since he lives in Jasper, every week Brad Wesley sends his goons in to wreck up his store and take his money. Dalton sees it as stealing, but Wesley calls it a “private donation” to the Jasper Improvement Society. Just another way of ripping off the town that Wesley thinks he owns completely.

Dalton gets things straight to the people who work at The Double Deuce. He lets them know that hes going to be running things HIS way and that’s it. Now, this speech reminded me of one from another film that came out a few years after Road House, that film is Reservoir Dogs. I couldn’t help but wonder if Tarantino was influenced by this scene in RoadHouse for his Joe Cabot speech where he gives the Dogs their color names.

While in Jasper, Dalton often keeps in contact with his bar bouncing mentor Wade Garrett (Sam Elliot). Wade is part cowboy, part biker and we can see that his history with Dalton goes back several years. Wade is the only family Dalton seems to have. Wade often calls Dalton “Mijo” a Mexican word which means “Son” or “Student”.

Dalton lays down the laws of The new Double Deuce and has to kick a few of the bar workers out so things run as smoothly as possible. One night he notices the bartender Pat McGurn (the punk band X’s John Doe) skimming money and going through too much liquor, so he kicks his ass out. Dalton doesn’t know at the time, but Pat is Wesley’s nephew. Now he’s really in deep crud. The next night Pat comes back with Wesley’s goons and challenges Dalton to a fight, while holding a large hunting knife. Dalton gets ready for another battle and the place erupts as Dalton and the other bouncers trash Wesley’s goon squad. Dalton gets cut again on his side and has to duck out and head to the hospital.

Dalton also finds a love interest with a doctor who sews up his wound from the fight. Her name is Elizabeth Clay (Kelly Lynch), turns out shes Red’s niece. They begin to start a relationship, but as bad luck would have it, Elizabeth is the ex-girlfriend of good ol’ Brad Wesley, which makes Dalton even more of a prime target of Wesley’s wrath. As well as fending off the bad element that enter the Double Deuce, Dalton has to contend with Wesley’s thugs, who start to cause lots of problems for Tighlman’s plans to clean up the place. The toughest is Jimmy (Marshall Teague) a mullet haired maniac that matches Dalton’s fighting skills.

So what does Road House have that makes it so entertaining and rewatchable to me? Well, I’ve found that it’s the movies taut direction, pacing, the colorful, down home characters and the simplicity of the story. Sometimes films like these get so misdirected that they will have you losing your place. On the surface, Road House could be mistaken for another average 80s action yarn, but it’s a stand out film filled with humor, tender moments and really good hearted characters that seem to help one another when the chips are down. I think the movie has something inherently special that will attract your attention again and again.

FURIOUS FILM GEEK NOTES: After watching the film numerous times, I’ve come to the conclusion that Patrick Swayze’s performance as Dalton was definitely inspired by Bruce Lee. Swayze almost seems to be channeling Lee’s aura throughout the film. He even performs daily rituals of Tai Chi. Dalton states to Elizabeth at their first meeting that he majored in Philosophy at college. Bruce Lee was a Philosophy major as well.

ROADHOUSE MUSIC: Cult film fans may recognize the singer in the opening scenes from Director Robert Rodriguez‘s 1997 horror comedy From Dusk Till Dawn. Thats right, it’s Tito Larriva (of Tito and and Tarantula!!) As the opening credits roll, Tito sings “Dont Throw Stones (You Dont Own)”. A great rockin tune!

The bulk of the film’s score is sung and played by Jeff Healey, an artist who was gaining some popularity back when the film was released. He recently passed away. As you can see in the film, Jeff is blind, but he has a great voice and adds a nice background soundtrack to the film. Healey covers a bunch of classic rock tunes including: “Roadhouse Blues” (The Doors), “Traveling Band” (Creedence Clearwater Revival) and more. 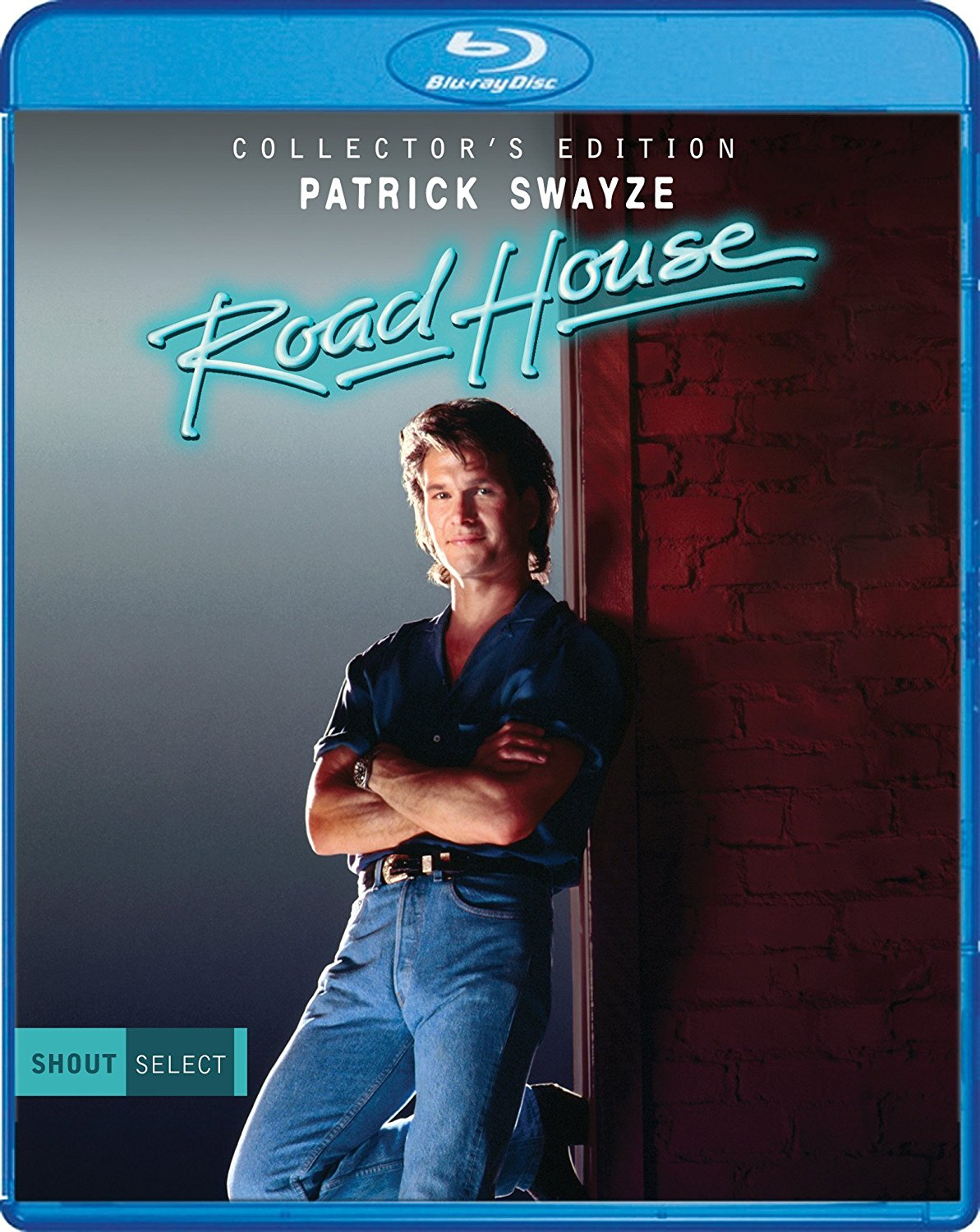