Director Andre de Toth’s 1953 Horror classic HOUSE OF WAX was a remake of Mystery of the Wax Museum (1933), but where that film had lighter comedic moments this version did not. It was the first 3-D film produced by a major studio and to feature stereophonic sound in a movie theater. At the time these new audio/visual formats were used to attract audiences who had become mesmerized by a new form of home entertainment called Television. Upon its release House of Wax became a huge hit and is now considered one of the greatest films to come out of the 1950s.

Set in 1910 New York, Vincent Price plays wax sculptor Henry Jarrod who owns a small museum. His business partner, Matthew Burke (Roy Roberts) wants him to create more outrageous figures to make more money but Jarrod relents. This provokes an impatient Burke to set the establishment on fire so he can collect the insurance money. As the blaze rages, Jarrod is nearly killed while he fights to save the work he’s created but somehow survives. After he recuperates, along with his new assistant Igor (Charles Bronson), Jarrod reopens his museum and gains great popularity with the public. His latest line of wax sculptures, entitled “Chamber of Horrors”, are inspired by famous crimes both past and present but hide a macabre secret that only he and Igor know.

Warner Home Video will release HOUSE OF WAX on October 1st in High Definition with 3-D. For those who love classic Horror and want to experience the exciting visual effects as they were intended, this is a must own! 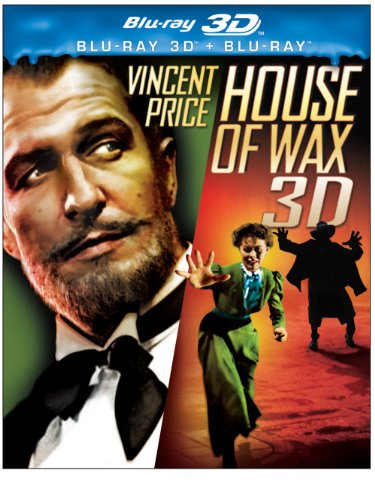