Leave it to the fine folks at Criterion to pull yet another hat trick in the new year with what I consider to be the ultimate home video release of Alex Cox’s 1984 cult sci-fi comedy-punk rock masterpiece REPO MAN. Now if you’re a film geek who grew up in the 80s, you probably know this movie well and have loved it ever since the first viewing. This movie holds a special place in my heart for a reason that I’ve spoken about many times over the years with different people. That is the Special Edited TV Version that Alex Cox put together himself when the film went into syndication. What made this cut different from the theatrical version was the fact it used an array of weird words to cover the cursing up. Rude expressions like “F**k You Motherf*cker” became “Flip You Melonfarmer”. Now, if you watch television regularly you’ll notice this is a common occurence BUT what made Repo Man unique in this case was the fact the movie was already a strange offbeat experience so the inclusion of these substituted words actually enhanced the film for the better. Not only that but the TV edition is longer featuring additional footage not seen in the theatrical version. For me, the movie is much more enjoyable because of these changes and I prefer it over the standard edition. That’s why I’m ecstatic to learn that FINALLY it will be included in the upcoming Criterion release. All I can say is they flippin’ rule for that choice!

Repo Man follows the adventures of a young neer do well punk rocker named Otto Maddox (Emilio Estevez) who after quitting his job as a stock boy finds himself drifting around with nothing to do. That is until he meets Bud Wiser (Harry Dean Stanton) a veteran repo man who pays him to help steal back a car from a defaulting client. Soon after Otto realizes this profession is perfect for him because of the intensity and adrenaline rushes that come with the jobs. Meanwhile in New Mexico, a mysterious man has stolen a Chevy Malibu that is rumored to contain the remains of alien beings and it ends up in LA. When the car comes up on the repo radar, a race between Otto’s business, some repo rivals as well as the Feds to try to recover the vehicle begins. The punk rock soundtrack featuring such classic acts as Iggy Pop, Black Flag, The Circle Jerks, The Plugz and Fear is the perfect background music for this wild and crazy mohawked movie classic!

The Criterion Blu Ray and Standard DVD will be released on April 16th. We highly recommend adding this 80s pop culture cinema treasure to your hi-definition library! 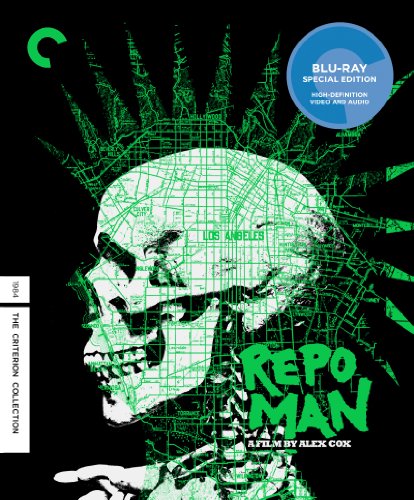