Shout Factory is continuing its streak of exciting and eclectic Blu Ray releases with SATURN 3, a 1980 Sci-Fi Thriller directed by Stanley Donen (Singin In the Rain) which will be released on December 3rd. Kirk Douglas, Farrah Fawcett and Harvey Keitel star together, and if you think it sounds like an odd combination of talent you’d be correct. It was originally intended to cash in on the success of Alien (1979) but, like many other films at the time, it was unable to attain the brilliance of Ridley Scott’s hit. The film largely panned when it debuted but over the years it’s cultivated an interest from curious movie aficionados.

The story focuses on Scientists/lovers Adam (Kirk Douglas) and Alex (Farrah Fawcett) who work at a hydroponic based research station on Saturn’s 3rd moon. Their peaceful environment is suddenly disrupted when employers send in an outsider, Captain Benson (Harvey Keitel) to set up a customized robot which, if successful, will replace the humans. Soon, Benson’s creation, nicknamed “Hector” whose brain is based off his own, turns into a psychotic killer and causes mayhem for Alex and Adam. One of the strangest aspects of this film that you’ll notice is Harvey Keitel’s voice which was dubbed over because of his Brooklyn accent which Donen didn’t like. The result is a film that, while not a true classic in the general sense, surely deserves another look from open minded genre fans. The upcoming hi-def release will be a perfect opportunity to do that. 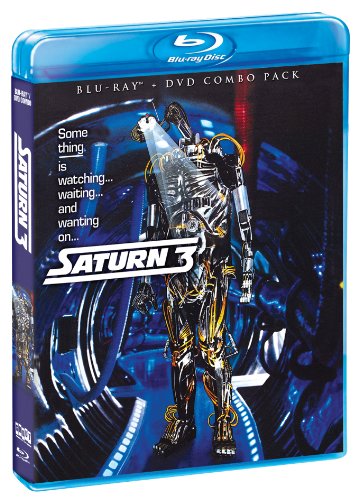