“It will never happen again!” read the tagline for this dark seedy crime film. On March 25, 2014 Drafthouse Films will release Abel Ferrara’s 1981 Grindhouse revenge thriller Ms. 45 UNCUT on Blu Ray. This is a long awaited event for fans of the movie that have been trying to get the uncut version in their mitts. Now they can also experience it in a newly restored high-definition presentation.

Zoe Tamerlis stars as Thana a beautiful mute seamstress who while walking home from work one day is raped by a masked assailant, then raped AGAIN at her apartment. Thana manages to defend herself from the 2nd attacker and kills him. The psychological trauma soon drives her insane and she begins a one woman war on men in the city using her .45 automatic. The film has become a cult classic due to its violent content and low budget yet sharply executed direction. After this movie Ferrara continued to explore inner city stories about rebels and underworld characters in films like Fear City, China Girl, King of New York and Bad Lieutenant. Ms 45 remains one of the best rape-revenge shock films of its time along with I Spit on Your Grave and is recommended to fans of furious Grindhouse cinema. 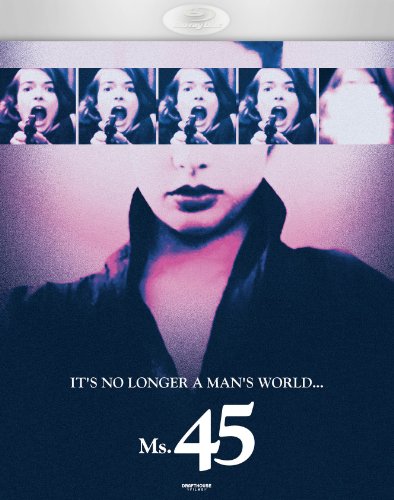