In The Swimmer Burt Lancaster plays Ned Merrill or “Neddy” to his upper crust friends in the Connecticut town where he lives. The story opens with Ned walking through the woods as wild animals scurry in different directions. The camera tracks above through the lushness of the trees as Ned enters the yard of some friends. It’s apparent that they haven’t kept in touch for some time. Still, they’re very happy to see him and sit around their pool recounting how they had way too much to drink the night before. Ned is cordial and gleeful and talks with them but seems to be preoccupied with something else. As they joke and tell stories Ned becomes enamored with their sparkling pool and wants to take a swim. He then comes up with a very strange idea out of the blue: to essentially swim back to his house by stopping at the pools of all his neighbors on the way. He refers to it as the “Lucinda River” named for his beloved wife who will be at home with their two daughters waiting for him when he’s done. His friends find this plan bizarre and before they can get anymore information, Ned walks off.

As Ned makes his way across the county barefoot, wearing only swimming trunks, the golden sun shines down brightly on the most beautiful summers day you could imagine. The Connecticut countryside is green and quiet, almost desert like. Ned meets several people he hasn’t seen in years, like Julie (Janet Windgard) his old babysitter who is now a beautiful blonde teenager. After catching up a bit he asks her to accompany him on his strange journey and she happily agrees. The two get to know each other again and she tells him how she had a massive crush on him years earlier. Ned is very touched and expresses his admiration for her as well. As the two walk on, they come to a horse corral and there’s a joyous slow motion montage of them jumping the hurdles inside like carefree children. Ned is beaming as he seems to find his youth once again. Although what begins as innocent fun soon gets more serious when Ned tries to get closer to Julie. She is shocked by his advances and suddenly runs off into the woods. Ned is alone again and realizes he went too far. At one home he encounters a young boy selling lemonade and finds out he is alone too. Ned wants to swim in his parents’ pool but soon discovers it to be empty of water. He comes up with an idea for them both to imagine they’re swimming and invites the boy to join him. Ned tells the boy he can do anything if he just believes in it and invites him to come over to play with his daughters some day.

While crashing a big party, Ned spots an old hot dog cart his wife sold without his approval being used. When he makes it known he wants it back, the owner (Dolph Sweet) angrily tells him to get out as the stunned guests watch on. Ned then stops at a young woman’s home that turns out to be his ex-mistress and they have a nasty verbal spat.

Ned who began his cross country journey brimming with vigor and sparkling eyes has slowly become deflated and cold. He starts to shiver and limp along as he continues to the end of this existential day trip through the waters of his past. He moves from light to dark, from full to empty from young to old.

The Swimmer has an almost hallicinatory effect throughout from its visuals and editing. It’s both dreamlike and ominous. The bright shiny persona Ned presents is a kind of camoflauge hiding something inside him that begins to reveal itself to us over the course of his adventure. As he skips from pool to pool we are given small bits of information through his mentions of his two daughters who are “playing tennis at home, waiting for him” and his beautiful wife Lucinda who we never see but picture as being some kind of goddess from his descriptions. It slowly becomes obvious that the imaginary river Ned created in his mind is one last desperate attempt to regain something he has lost and can’t get back. The trek Ned embarked on with so much hope will have to finally come to an end. The Swimmer was based on a short story by author John Cheever which appeared in a 1964 issue of The New Yorker (he makes a brief cameo in the film as a drunk house guest). The film was shot in Westport Connecticut in 1966 and was written by Eleanor Perry and directed by her husband/partner Frank Perry (Mommie Dearest). The supporting cast includes Marge Champion, Kim Hunter, Diana van der Vlis and a young Joan Rivers.

PICTURE: Presented in (1:85:1) Widescreen.  The new high definition digital restoration created from 4K scans brings this movie back to its original gleaming glory. It is a beautifully photographed film and you will get to see all the spectacular imagery with this special edition.

SPECIAL FEATURES
THE STORY OF THE SWIMMER – This extensive, in-depth multi-part documentary on the making of the movie features insightful interviews with 1st and 2nd Asst Directors Michael Hertzberg and Ted Zachary, Actresses Janet Windgard, Marge Champion and Joan Rivers, UCLA swim coach Bob Horn (Burt Lancaster’s teacher) and Lancaster’s daughter Joanna. Also included is archival footage of late film editor Sidney Katz and composer Marvin Hamlisch. You won’t be dissapointed with this as it covers every angle of the film from inception to its impact on pop culture. One thing that everyone involved conveys is how amazing and professional Burt Lancaster was on the set. He truly was one of the greats.

– Director Allison Anders interviews actress Marge Champion: In this really cool extra we goto The TCM Classic Film Festival where Ms Anders (Border Radio, Gas, Food, Lodging) talks to Marge following a screening of THE SWIMMER. We get to hear more about her thoughts on the film and her career.

THE FINAL WORD: A film like The Swimmer is a bit of a departure for Grindhouse Releasing who mainly specialize in wild and crazy exploitation genre cinema. This is an often overlooked oddity from the late 60’s that doesn’t fall into any standard category and features one of Burt Lancaster’s finest performances. It is a special little gem that I think people will enjoy if they give it a chance. It is a story about loss and change we can all identify with on some level. The superbly produced Blu Ray/DVD package is jammed with extra features that will give new and old fans of the movie a very complete view of the production from start to finish. Recommended! 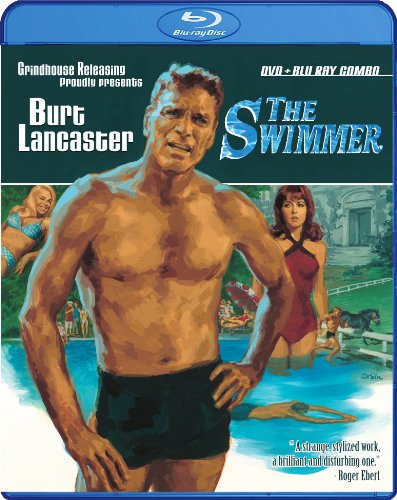