In between making his hit films The Godfather Parts 1 and 2, Francis Ford Coppola chose to develop an original screenplay he had written several years earlier. This was, like his 1969 film The Rain People another of his smaller, more personal works and very much an example of the kind of movie he wanted to continue to do throughout his career. 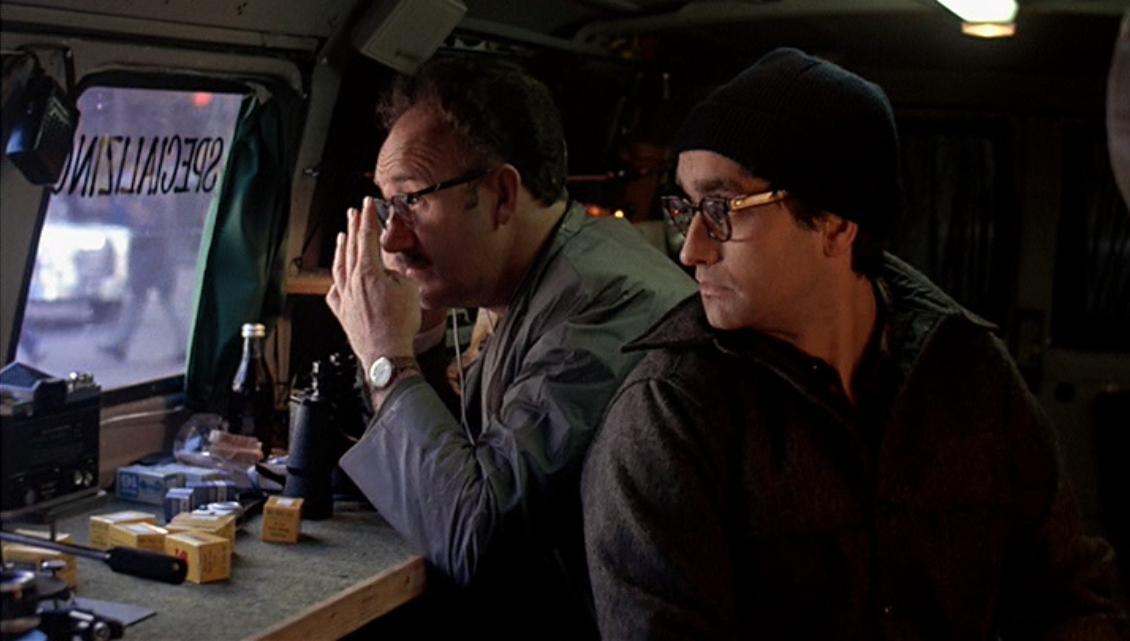 The Conversation was inspired in large part by a discussion Coppola had with fellow director Irvin Kerschner about the topic of surveillance and because of a film he had been affected and impressed by. That movie was Michaelangelo Antonioni’s 1966 conspiracy thriller Blow Up, in which a young, hip British photographer (David Hemmings) unknowingly takes a photo of a murder and when he discovers what he’s done, becomes obsessed with solving the mystery behind the image.

In Coppola’s own take on that story, he uses the profession of surveillance as his mode of entry into the world of Harry Caul (Gene Hackman) an expert in the field who has taken a new job spying on and recording a young couple (played by Cindy Williams and Frederic Forrest) for a wealthy businessman he doesn’t know much about. 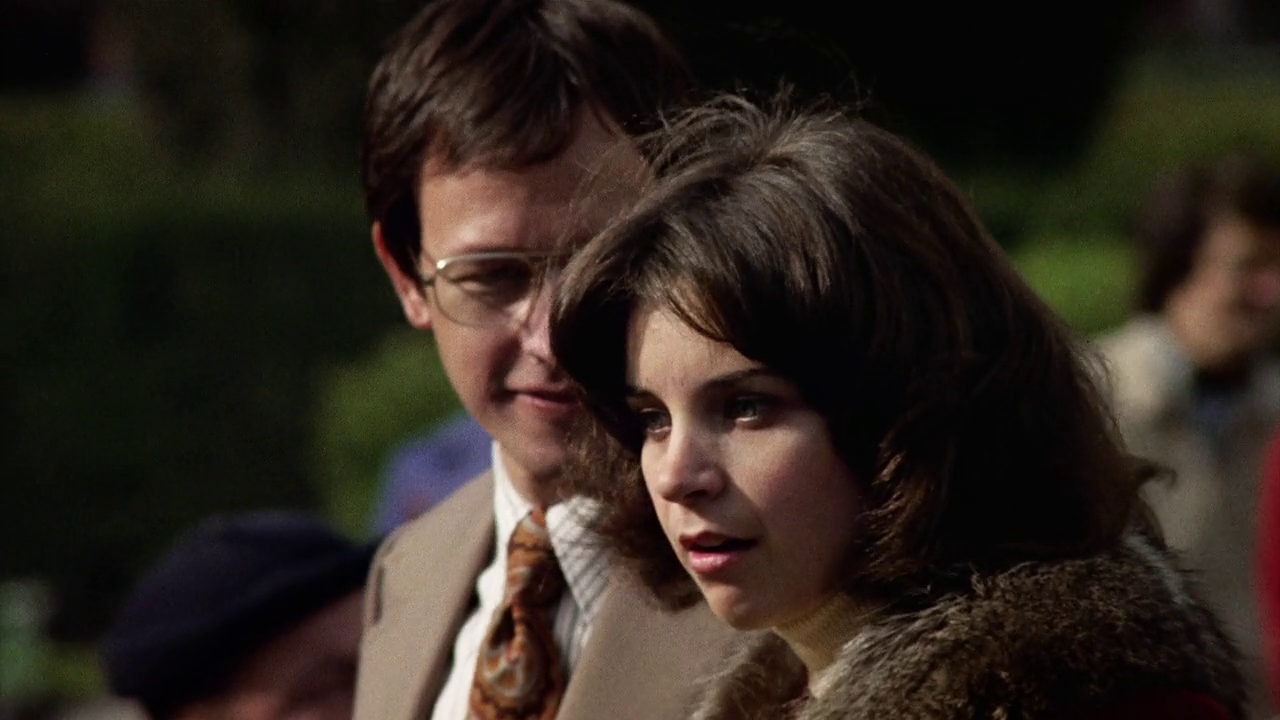 From the start Caul comes across as an emotionally distant, lonely guy and someone who keeps many secrets, even from those he’s closest to, like his business partner Stan (John Cazale) and his girlfriend (Terri Garr) who he financially supports and keeps in an apartment he visits on occasion. The only real bit of emotion that Harry emits is through his hobby: playing the saxophone. We get the sense that inside him beats the heart of an artist, but that dream was something that he had to let go of long ago. Yet even with his personal flaws, he has come to be known as one of the best in his profession, designing a variety of special recording devices to help aid him get the best results.

When Caul visits a local surveillance convention, he runs into the loud mouthed Bernie Moran (Allen Garfield) a competitor who is always on his case, trying to find out what his latest gadgets are. He then notices Stan who has begun working for Moran after a falling out, which only sours his already chilly disposition even more. Still, Moran being a jovial guy, invites Harry out to have some drinks and meet some girls. They end up back at Harry’s office (in a large empty factory building) and have a relatively good time until Moran brings up a wiretap job Harry did that went bad and left several people dead. This enrages Harry who makes Moran and his fellow partygoers leave. One of the girls, who looks to be a callgirl stays with Harry and the two make love. 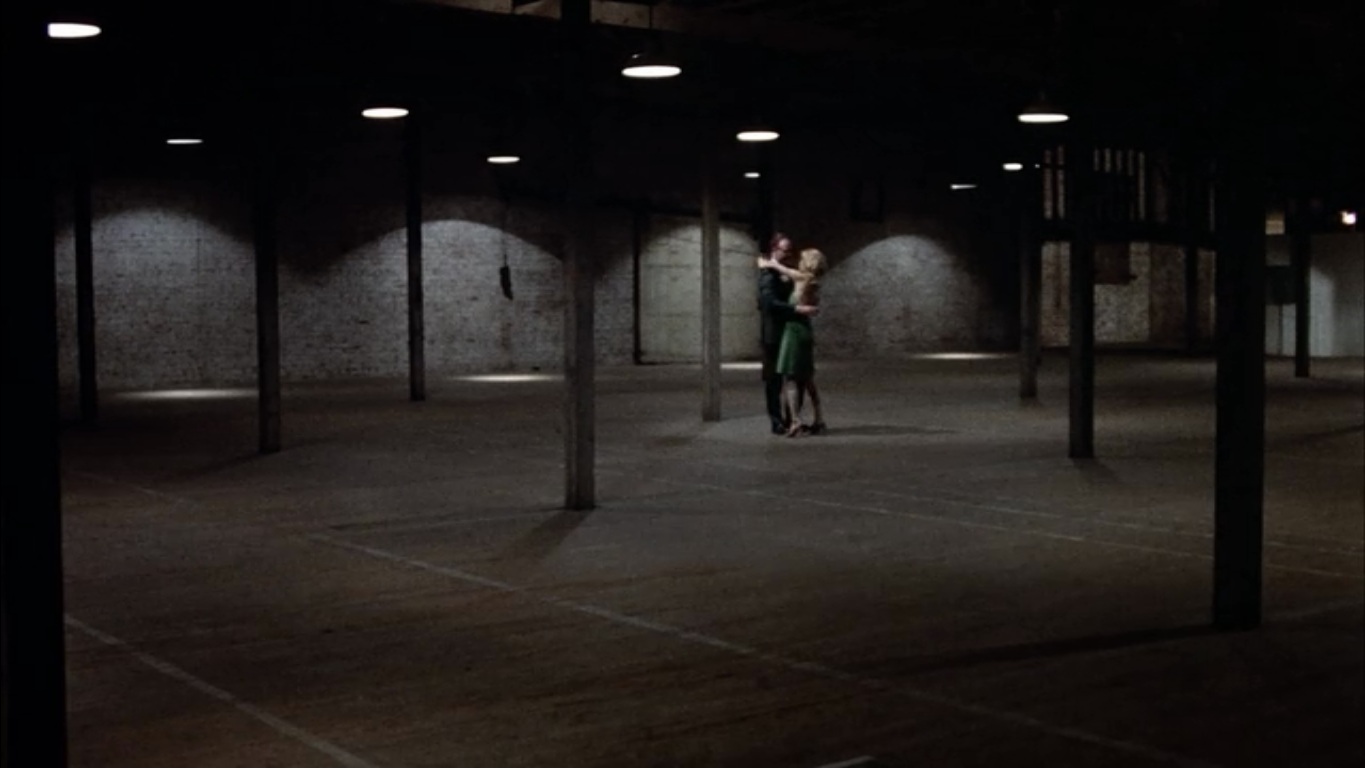 Coppola uses a slow, methodical tightening on the intensity of the movie as it progresses. Harry, who at the beginning is the voyeur watching from a safe distance gradually gets pulled into the eye of the storm and becomes more distraught and obsessed about the recordings he’s taken and what could occur if he doesn’t intervene. His guilt over the past consumes him and what starts out as just another job, spins his private, anonymous life out of control.

The score by David Shire brilliantly accents the feeling that Coppola stirs up through showing Harry’s growing mistrust of people and the environment around him. It’s at once simple (only a piano) but contains a dizzying melody that works perfectly within the context of the story. As the film plays out, the piano even morphs into more strange, electronic sounds giving the atmosphere a chilling, futuristic aura. 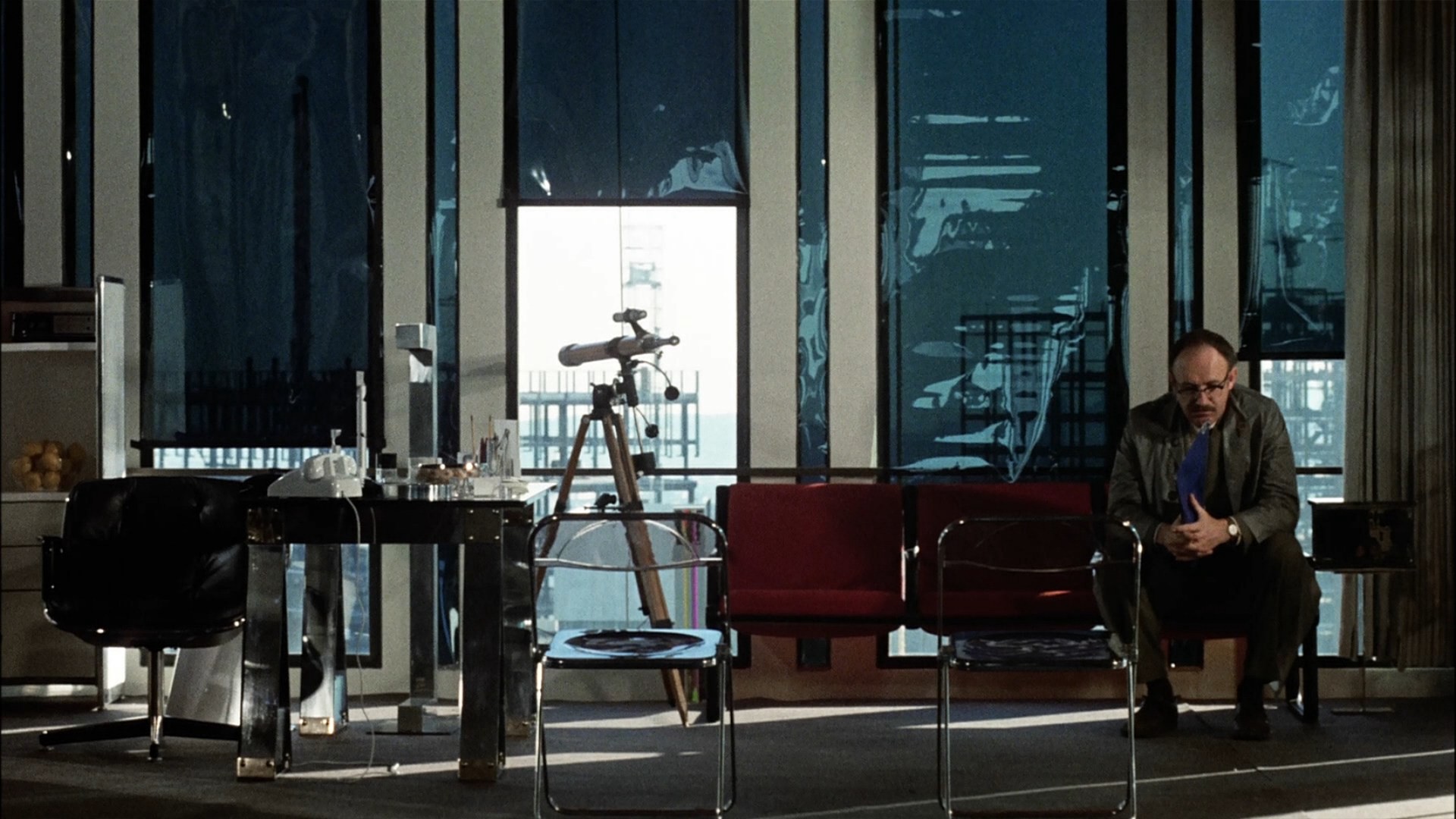 The subject of recording devices and murder would be re-invented yet again a few years later by another director and one of Coppola’s friends Brian DePalma, who set the conspiracy storyline around a soundman for an exploitation film production studio. The movie was Blow Out (the title an even more direct homage to Blow Up) and is, like both its precursors, another gripping masterwork of cinema storytelling.

– Reportedly Gene Hackman’s favorite movie in which he has acted.

– The blue Mercedes limousine that Cindy Williams is sitting in near the end of the film was won by Francis Ford Coppola on a bet with Paramount Pictures. Coppola had complained about the station wagon he shared with five other passengers during the filming of The Godfather and studio execs told him if Godfather grossed a certain amount they would spring for a new car. After Godfather was a huge hit, Coppola and George Lucas went to a dealer and picked out the Mercedes, telling the salesman to bill Paramount.

– Gene Hackman later plays a former NSA agent who is a surveillance expert in Enemy of the State, and the images of his character in his younger days are taken directly from this film.

– Coppola had written the outline in 1966 but couldn’t get financing until The Godfather became a success.

– The part of Martin Stett, played by Harrison Ford, was originally intended by Francis Ford Coppola to be a minor cameo but Ford’s performance convinced Coppola to make the character an integral part of the movie.

– The meaning of Harry’s last name, Caul, is a fetal membrane sometimes present at birth. This ties in strongly with both Harry’s transparent rain jacket, which he wears for the majority of the film, and also the fact that Harry is occasionally viewed through a translucent sheet of plastic when threatened, such as by his rival during the party scene.

– David Shire’s original music was composed prior to production and played for the actors prior to their scenes to get them into the proper moods.

– Gene Hackman learned to play the saxophone especially for the film.

– As Harry refines and re-refines the recording, he interprets what he hears in different ways. In fact, the dialog was recorded multiple times with different readings to get this effect. 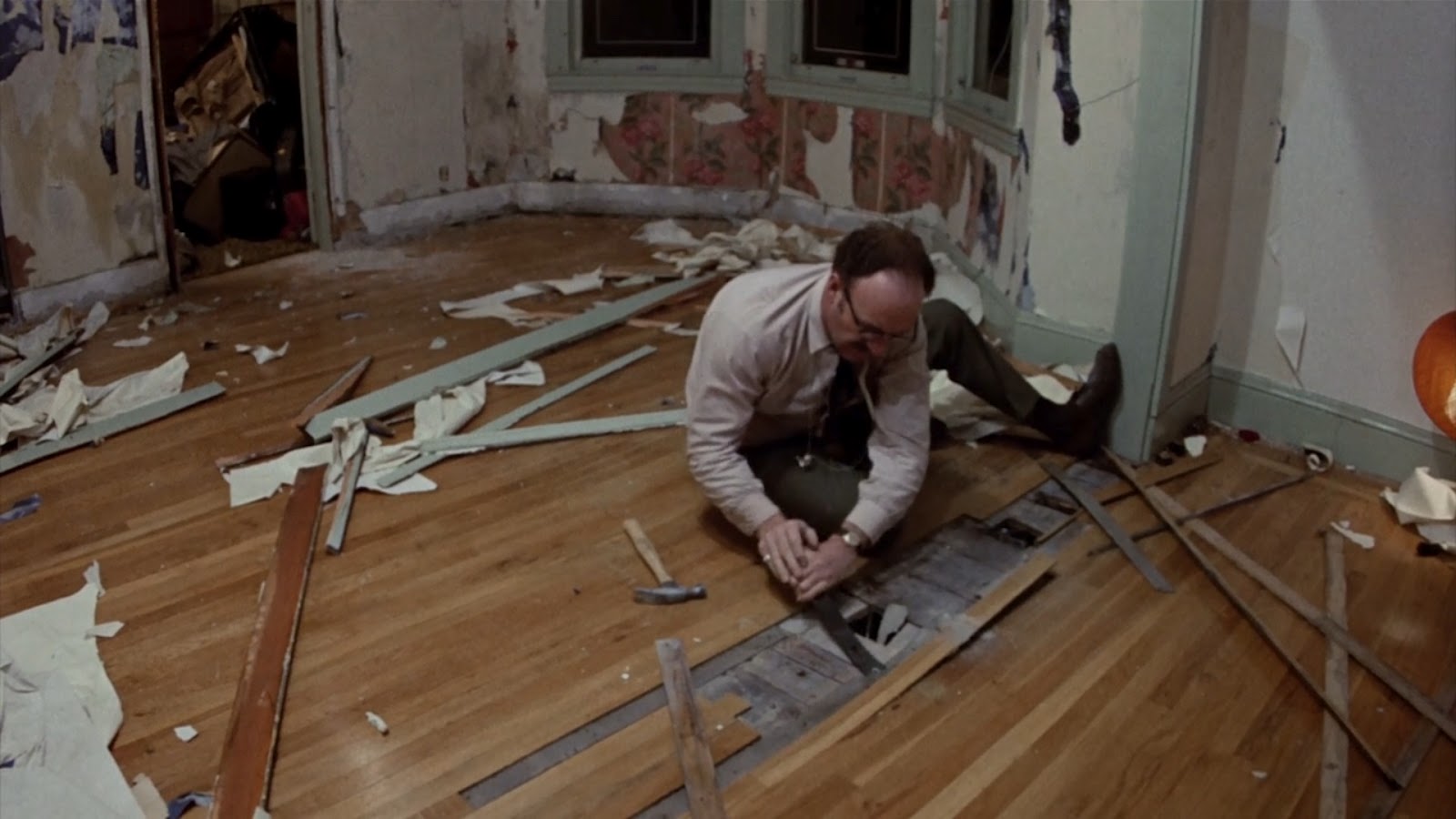 Picture: Presented in (1:78:1) 16 X 9 Anamorphic Widescreen/1080p High Definition – The new transfer is superb and brings a truly stunning clarity to this early 70s film. The cimematography of the San Francisco setting with it’s rustic color palette and dark contrasts of the nighttime scenes are incredibly well rendered.

– Interview with Francis Ford Coppola and Composer David Shire (NEW): The director reminisces with Shire about working on the film. Shire describes his process of working with Editor Walter Murch and how it helped make the film even better than a traditional approach. Includes a comical backstory about an early film screening and even a fun Coppola/Shire piano singalong to close it out.

– Harry Caul’s San Francisco featurette (NEW): A look at the film’s locations then and now.

– Discussion with Francis Ford Coppola about his early film exercise “No Cigar”: In this brief featurette, Coppola describes the idea behind his first short film featuring his Uncle. One of The Conversation’s earliest inspirations.

– Close up on The Conversation featurette: A promotional behind the scenes documentary on the making of the movie with Francis Ford Coppola who talks about his process of creating the project and working with the great cast of actors.

– Archival on set interview with Gene Hackman: In this rare footage, the actor gives some personal insight about his character Harry Caul and his enjoyment from working with Coppola.

THE FINAL WORD: Longtime fans of Coppola, edgy 70s cinema and classic films in the psychological thriller genre will want this masterpiece as part of their Blu Ray collection. Highly recommended!

Buy The Conversation on BluRay 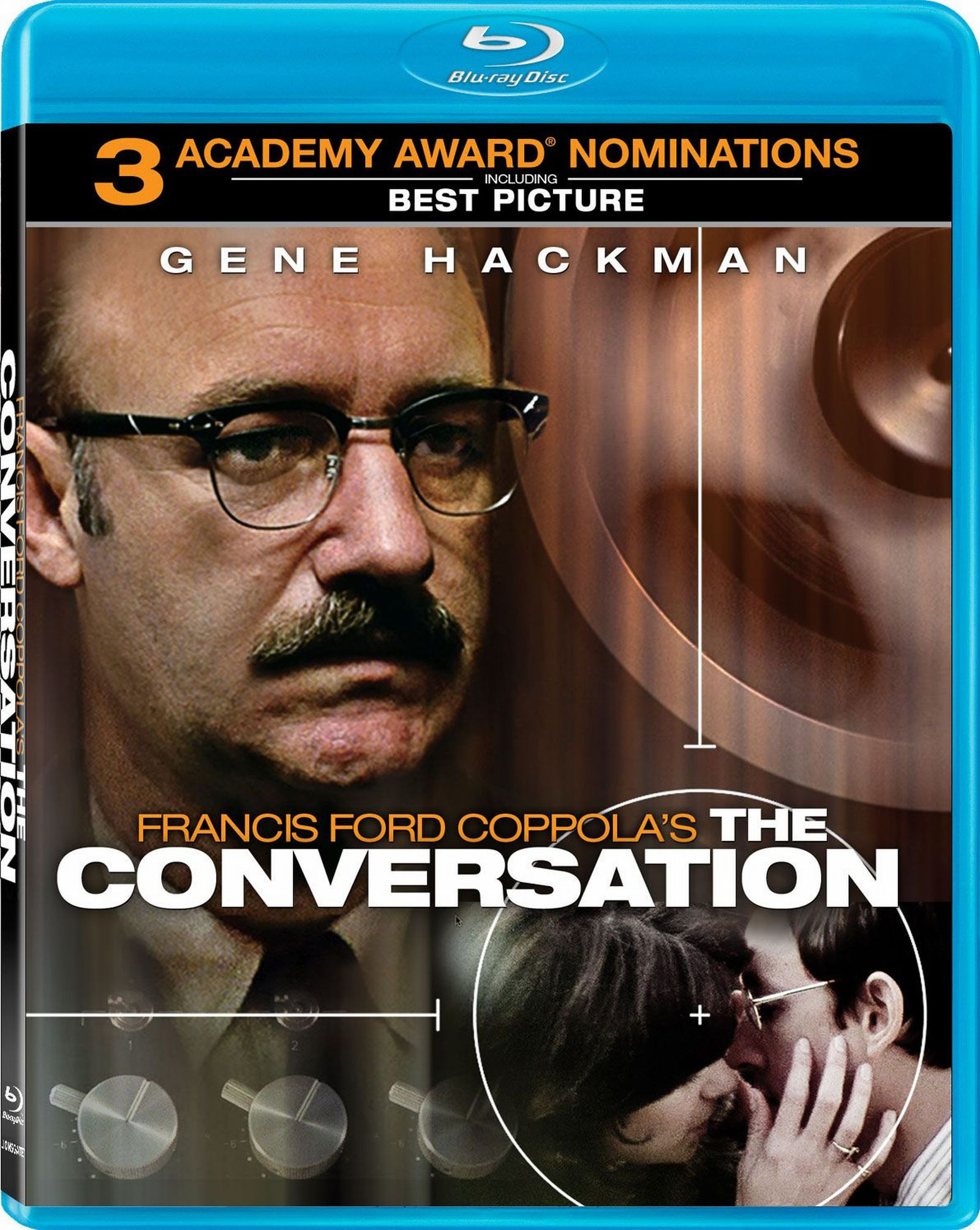