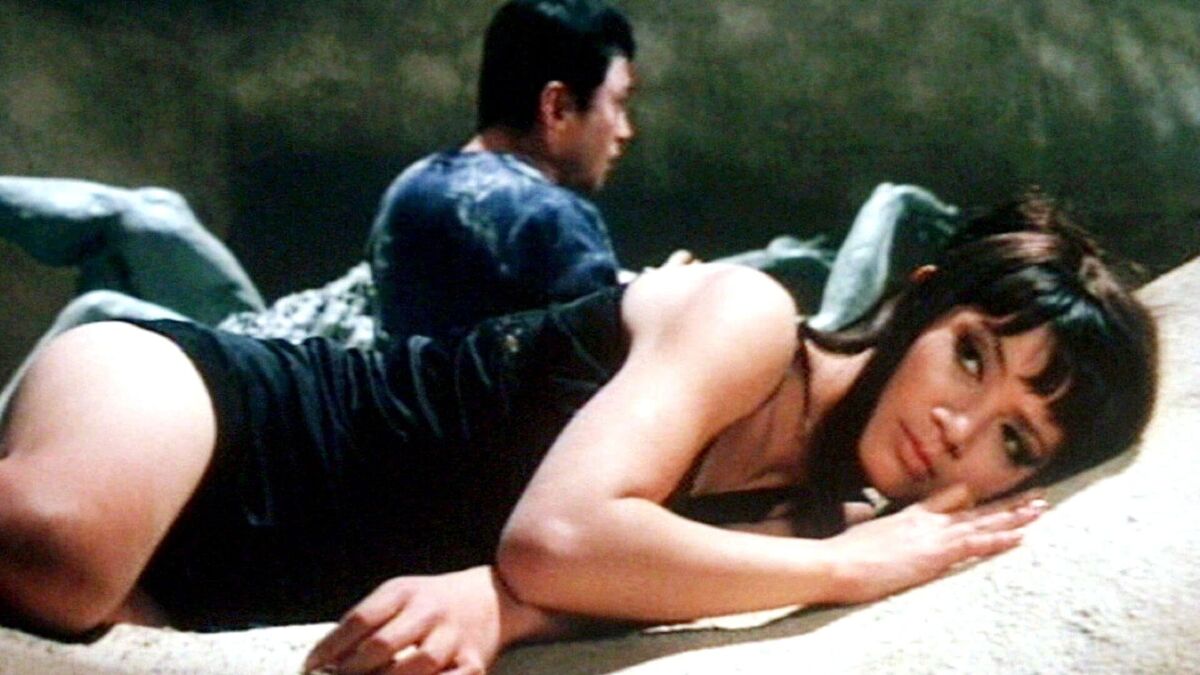 Trying to increase my #Japanuary dosage just a little bit more (also see my recent review of Irezumi), I went for Blind Beast (Môjû) next. Arrow Video’s BluRay release seems like a great opportunity to further expand my short exursion into the work of Yasuzo Masumura who also directed this one. I was mighty impressed with Irezumi, so my expectations were elevated (Blind Beast is from 1969, Irezumi from 1966, so this is a later work work).

The somewhat perverted and blind sculpotr Michio (Eiji Funakoshi) lives with his mother (Noriko Sengoku) in an abandoned warehouse. Having heard of the model Aki (Mako Midori) being displayed at an exibition in the form of daring black and white nudes and sculptors, he goes there and becomes obsessed with the woman. He kidnaps her and intends to use her as a model for the perfect sculpture, using only touching as an art form. Initially repulsed, Aki tries to either escape, or trick Michio. Over time however, she succumbs to his strange obsession, they develop a mutual attraction and descend into a spiral of lust, sensation, violence and desperation…..

With a nice length at 84 minutes (IMDb says 86), Blind Beast seems an easily digestable affair. But that’s far from it. What unfolds is quite theatrical in parts, with plays of light and shadow, minor overacting and very impressive set designs. It is also a story that gets you deeper into the rabbit hole of depravity. Starting off as somewhat of an arthouse mystery it goes full perversion toward the end, with bouts of cannibalism or vampirism. The movie is artsy, no doubt, and it’s incredibly artistic in its minimal set structure, production design and camera work. Also the acting, boasting a maximum of three mimes working the stage.

The movie is sexual in nature – albeit timid by today’s standars and not full on Pinky. But one could imagine what a riot this must have been back in the days. This descent into depravity, violence, mutilation, quest for sensation in front of a mindboggling set design (some of it reminded me of Femina Ridens) does not hold back. For a 60s movie it is incredibly frank and uninhibited, and while the mad artist’s potrayal seems a bit laid on too thick, the protrayal of … let’s call her the muse… is masterful.

Ms Midori is quite catching – and convincing – she starred in about 70 movies and TV series over the years, her latest entry being from 2017. She appeared in Hanzo movies, alongside Sonny Chiba, in the police movie Stray Dog and others. In Blind Beast she dares to walk a constant fine line between victim and depraved. The audience will struggle to follow her along on this journey, always hoping for another step down the rabbit hole of desire to be yet another trick of her character to yet escape the clutches of her mad captor.

All in all, Blind Beast is a marvellous movie, intense by all means, a minimalist Kammerspiel with sexual and violent undertones without falling into the sleaze trap. What a trip!

The BluRay came out last summer. The image looks great, albeit not as popping in the color department, due to a slightly faded look. The blacks are okay, with decent contrast, and there is plenty of detail even though it seems to not have been the highest resolution scan. Overall, it’s a very pleasant transfer that does the movie plenty of justice.

The Japanese original mono audio presented here sounds flawless, with decent dynamics and very earthy sound, even though in the heights there’s some slight hisses with loud noises (screaming etc.), but overall very solid. The English subtitles are nice to read and seem well written (I speak no Japanese so I cannot judge their accuracy).

There are a range of extras on this disc, as well. There is an iIntroduction by Tony Rayns that goes about 18 minutes but is mostly about Masumura than the movie itself.”Blind Beast: Masumura the Supersensualist” is a video essay by Edogawa Rampo (the author whose work this movie is based on) scholar Seth Jacobowitz (10 minutes). Then there’s the original theatrical trailer and image gallery. The main extra is an audio commentary. This one is with Earl Jackson, connoisseur of the director’s work, which is very informative and enlightening.

The reversible sleeve offers original artwork on one side, and amazing (pictured below) commissioned new artwork on the other.