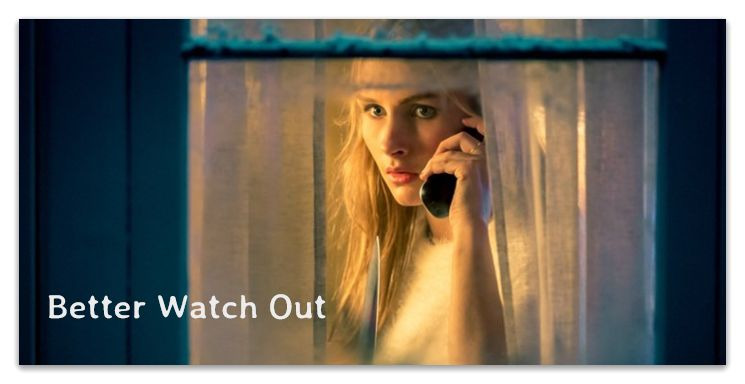 It will be scary this Christmas …    If you don’t like Christmas, you can always watch a horror movie. There are quite a few horror movies set in Christmas time and this one is a welcome addition to the collection. Better Watch Out was labeled as a comedy *and* as a horror movie and yes, it’s both scary and funny but don’t get this wrong: It’s tongue-in-cheek, but definitely not – I repeat: not – a spoof.

The premise is rather simple: 17-year-old Ashley is asked, by a couple from the neighborhood, to do a baby-sitting job at Christmas eve. The problem is: the boy she’s supposed to look after, Luke, is twelve years old and has developed some interest in the other sex lately. But the two have known each other for years and when Luke tries to seduce her while they’re watching a horror movie, Ashley feels more amused than worried. He is quite persistent, but soon his advances are the least of her problems when an uninvited guest is trying to get into the house …

Better Watch Out was shot in Australia, the setting is Suburbia, a safe surroundings for well to do families and their spoiled kids: everything looks nice and clean, but the evil is lurking outside. Or is it already inside? This may sound as if we’re heading for just another Home Invasion movie: it freely borrows from classics like Black Christmas (both the original 1974 version and the 2006 remake), Home Alone and a couple of others, but there’s a radical plot twist half way through that puts the whole thing upside down. To lift even the smallest corner of the veil could spoil the fun of this small but engaging movie.

Better watch Out hold a 88% approval rate at Rotten Tomatoes, but is nevertheless not for all tastes: the horror is not particularly graphic – actually it’s remarkably self-contained in this aspect – and wasn’t appreciated by some diehard horror fans, who had expected a torture porn flick in the vein of Hostel (2005) or a slasher of the Silent Night, Deadly Night type. At the same time some viewers rejected it for being too evil-spirited and nihilistic. But most people who saw it, agreed that the young actors are terrific. 17-year-old Ashley is played by 18-year-old Olivia DeJonge, who has all the charms of a blossoming teenager that could become the object of desire of a precocious kid. Levi Zane Miller, who plays Luke, was 14 when the film was shot, but with his deep blue eyes and curly hair he almost looks ageless, as if he’s going to look like a cuddly kid forever. He actually played Peter Pan in Joe Wright‘s Pan (2012).