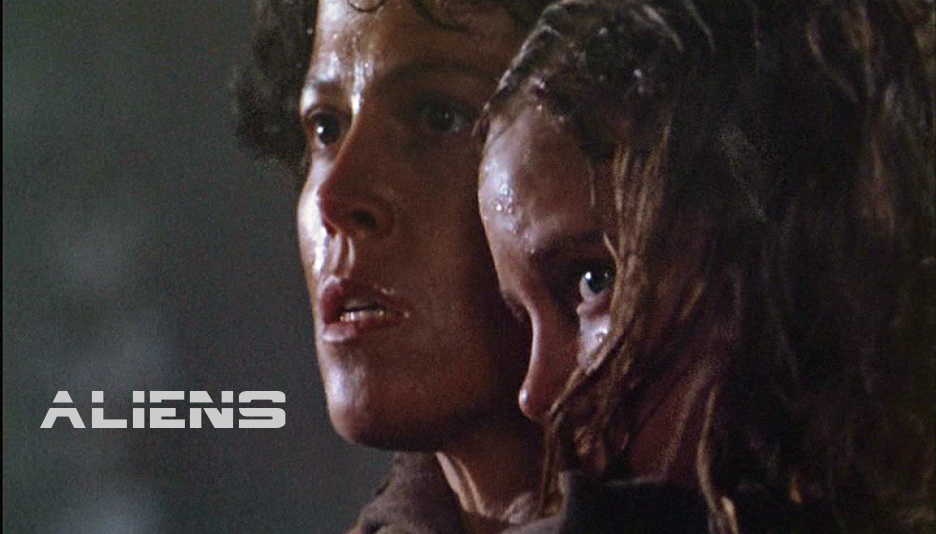 The premise of the first movie, a crew trapped in a space ship, had created a feeling of oppression and claustrophobia. Often sequels try to recreate the atmosphere of the original, but in the case of Aliens, it was decided to make the sequel as different as possible. The first movie had been suggestive, so the new one would be explicit, the original had been relatively small scale, therefore the sequel should be gigantic, a Titanic of a space horror movie.

Brandywine productions, the company that had also produced the first movie, thought James Cameron was the right man for the job. Cameron was still a relatively unknown name in Hollywood, but the producers were impressed by his first feature length movie The Terminator, and they also knew that he had contributed to the script of Rambo: First Blood part II, so they reckoned he would add some violence XL to the horror menu. The cast and crew were very skeptical; most of them would have preferred to work with Ridley Scott and thought the relatively unknown Cameron was a poor substitute for Scott. But the Brandywine people went through with their plans and got exactly what they had asked for. Sigourney Weaver returns as Ripley, the sole survivor of the incidents aboard the spaceship Nostromo. She was picked up by rescue ship after drifting through space in hypersleep for 57 years. The company that hired her, the Weyland Yutani Corporation, is very skeptical about the destruction of Nostromo and her stories about an alien predator killing all other crew members. Ripley even loses her flying license, but shortly after she is visited by a company representative named Carter Burke who is accompanied by an officer of the so-called Colonial marines, a special force responsible for the safety on extra-terrestial colonies. The planet where Ripley and her team picked up the alien, LV-426 (*1), is now a ‘terraforming territory’: the Weyland Yutani (“creating better worlds”) is preparing the planet for colonization, but contact has been lost. The company wants to send a salvage team to planet, and yes, you guessed it, they want Ripley to join the team as an expert on alien life-forms …

The most famous tag line of the movie was:

And war it is. In the first movie the alien had essentially been an incubus or succubus, a devil in the flesh who penetrated the human body to do its diabolical work (*2). The symbolic meaning of such a creature, is both religious and sexual. In Aliens, the atmosphere is more ‘down to earth’ (in spite of the setting in space): humans and aliens are engaged in a fierce battle for territory and it’s not clear who ‘penetrated’ who. The aliens have attacked the colony of the humans, but the humans tried to colonize an alien breeding ground: the alien queen – who appears in the film’s finale – had chosen LV-426 to hatch her eggs. The ‘aliens’ from the title might refer to both the predators and the humans: both originate in another part of the universe, both are alien to LV-426 and the planet is destined to become an Armageddon in their war for domination. As said before, the great thing about the Alien franchise, is that directors get the chance to put their own stamp on the product. Aliens really is a Cameron movie, including a typical over-the-top ending, with Weaver as a kind of Rambolina in space. With its swift pace, superior special effects and the development of the Ripley character into a one woman army (she calls her opponent, the Queen of the aliens, a “bitch”: Armageddon is a Battle of the Bitches), the film even surpassed all possible expectations. What makes it so special, is that – in spite of all the gloss and blockbuster pretentions – it’s as frightening as its predecessor. Which one of the two movies you prefer, is probably a matter of taste. Both are great films in the their own right. I have a slight preference for the first movie, in the first place because there are a couple of things in this second that I do not like.

Aliens is an 80s movie, therefore we get some stupid Eighties humor, brought by a couple of stupid Eighties characters, such as Bill Paxton’s wining and moaning Marine, and Paul Reiser’s deceitful corporate lawyer. Bill Paxton isn’t a bad actor, especially when playing a slightly ambiguous, drily humorous character and he has a few funny lines in the first part of the movie, but as soon as things get serious, and he starts complaining about the situation, he becomes a bore. Of course: films like these need weaker and deceitful characters, their function is to highlight the qualities and heroics of the stronger characters, and Aliens has some of the strongest characters in horror fiction, not only Ripley, but also Hicks, the squad leader who fancies Ripley (the feelings seems to be mutual), and above all Newt, the young girl and only survivor of the terrorized colony, who helps surviving the newcomers by showing them the way through the ventilation system of the plant. Nice support is given by Lars Henrikson (as a good and witty android: ”I might be synthetic, but I’m not stupid.”) and Jenette Goldstein as Vasquez, the female member of the marine squad, a girl who’s muscles are as impressive as her hips (“Hey, have you ever been taken for a man?” “No, have you??”) The shortcomings are all minor and outweighed by the film’s strong points. Cameron builds up an enormous suspense in the first half of the movie; the first scenes on the nearly deserted planet – the marines investigating the destroyed human facilities – are spine-chilling and once the large-scale action gets going, the movie becomes a roller coaster ride, fast and furious, unequaled in recent movie history.