A Blueprint For Murder

Film Noir. Full of trenchcoats, femme fatales, murder and intrigue. When men were men and dames were sassy, making you long for a yesteryear full of World War II’s (so good it needed a sequel), ration books and polio. Ah, memories…Seriously though, I do love this genre. Whether it’s Bogart and Bacall burning up the screen in To Have And Have Not, the whistle scene is one of the sexiest things ever commited to celluloid, or Orson Welles diving in and out of shadows in The Third Man, slap some Film Noir on my TV and I’m as happy as a pig in the proverbial. 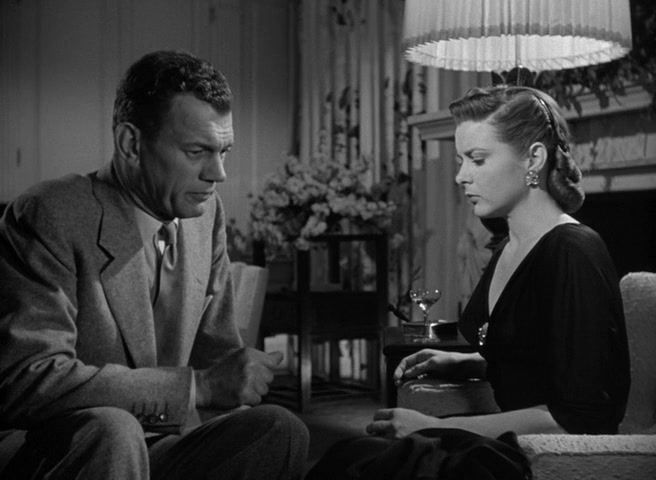 So when I managed to find a copy of A Blueprint For Murder I was more than happy to give it 76 minutes of my life. It’s starts with a siren screaming through the night as an ambulance rushes Polly Cameron (who is played by absolutely no-one as she *SPOILER ALERT FOR A 63 YEAR OLD MOVIE* dies within the first 7 minutes of the film) to hospital as the poor child is feeling poorly. Once there she is rushed off screen to a waiting room (did I mention we never actually see her?) and we are introduced to her Uncle Whitney “Cam” Cameron (Joseph Cotten) who has rushed to her bedside. Cam arrives at the hospital and meets his widowed sister-in-law Lynne Cameron (Jean Peters…RAWR) who tells him that Invisible Polly was suddenly taken ill but the doctor’s say that she’s over the worst of it and is out of the woods.

Feeling relieved, Cam takes Lynne up on her offer to spend sometime with her and his favorite nephew Doug (Freddy Ridgeway) who loves and adores him like the father figure he doesn’t have on account of his old man being worm food. We then go to Lynne’s home where they all share a nice meal, well it looks nice, for all I know it tasted like crap, and chat about baseball and the likes until Doug lets slip that Polly’s symptoms we’re exactly the same as his dad’s before he popped his clogs. This leads Lynne to remark how boys have such wild imaginations, yup that old chestnut, and that her late husband died of a passing virus before making sure Doug gets his ass to bed like it was on fire. Here we find out that the kids aren’t actually hers but from Bill Cameron’s first marriage but Old Cam thinks she does a great job with them and that his brother was a lucky guy. You sly old dog you. Suddenly the phone rings breaking the moment and after Lynne, who looks hella pissed off at the interruption, answers it she says that somethings wrong with Polly and she’s taken a turn for the worse. We then cut to Cam at the apartment of Fred and Maggie Sargent (played by Gary Merrill and Catherine McLeod respectively) where he breaks the news to them that Polly is stiff city. I think it says a lot about Cam’s suitability as an uncle that he show’s more emotion when he’s trying to doink his dead brothers wife than he does reporting the sad demise of his niece but then maybe I’m just reading too much into it. 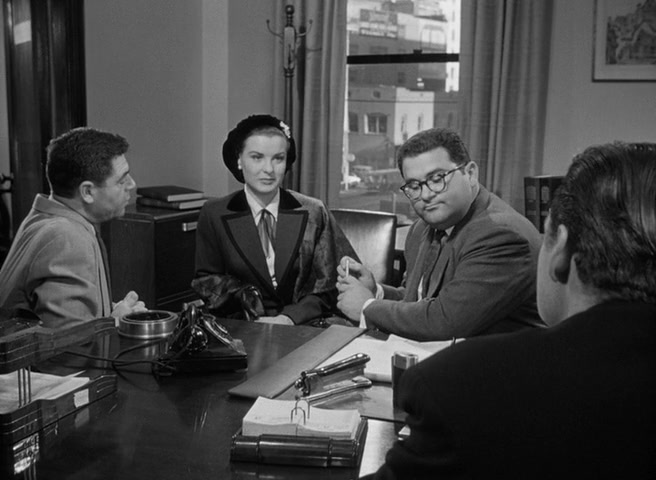 While Cam, Fred and Maggie sit around drinking tea and discussing Polly’s death, Maggie remembers that she used to be a journalist and while looking into a story 7 years earlier an unnamed man’s murder had a spooky similarity to what happened to Cam’s Invisible Niece. This leads Maggie to try to convince Cam that Lynne is behind the deaths of Polly and Ben which Cam has difficulty believing due to him still trying to pork though common sense prevails after Fred phones him and casually mentions that, as his brothers lawyer, he knows Lynne only gets interest on Ben’s estate unless both the kids are corpses. Seriously Fred, why the FUCK did it take you that long to bring it up??? Y’d think something like that would’ve been THE FIRST THING OUT OF YOUR MOUTH when Cam told you Polly had died. Pfft. Lawyers. With Lynne planning to take Doug to Europe, as we have great places to poison children (advert sponsored by The European Tourist Board), Cam gets Polly’s body exhumed so they can perform an autopsy as Lynne said that she didn’t want one done in the first place. Really? How stupid are these people?

It turns out Polly was riddled with enough poison to kill an elephant but our Cam still finds it difficult to belief that Lynne had anything to do with it, stupid hormones, and it isn’t until he finds out that Lynne filled a prescription for the hospital that could’ve been switched with strychnine does he finally start to face facts that he might not be getting any as the object of his desire might just be a money hungry, serial poisoner. But like all good femme fatales Lynne is a shrewd customer and no matter how hard they try they can’t prove that she’s a killer which is great news for her and not so much for Doug as as soon as he returns home we find out that Lynne’s trip abroad is happening, tomorrow. 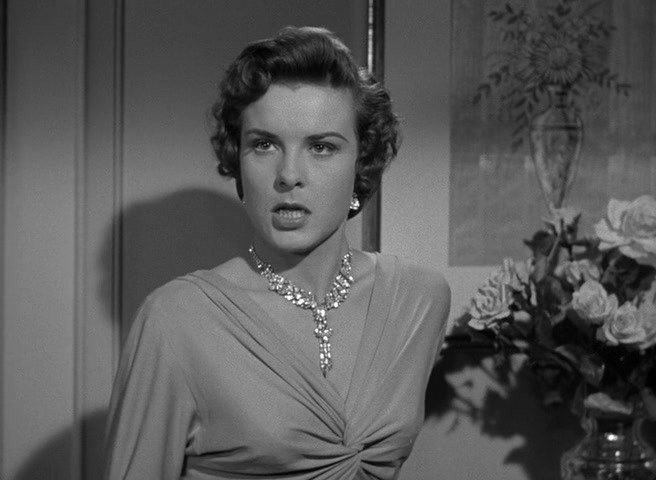 Hey, strike while the iron’s hot I always say. To make sure nothing untoward happens to his nephew Cam decides to gate crash their trip under the guise of wanting to bump uglys with Lynne when in reality Cam has planned to poison the shit out of her to see how she likes it but no matter how hard he tries he can’t go through with it, until he finds strychnine tablets hidden in Lynne’s aspirin. Over cocktails he slips one of the tablets into a drink he then hands to her and watches as she gulps it down before confronting her about what he’s found, which she denies is anything more than what they appear to be, even after Cam tells her he’s slipped her a mickey to which she calmly replies: “Death by strychnine or death by electric chair”.

Jean Peters comes into her own here, dropping the nice girl act and revealing her character’s true self, cold, calculating and more than happy to die so Cam goes to the chair himself for her murder, even with the poison flooding through her veins she keeps it together long enough to convince Cam and the ship’s detective that she had only taken asprin and that Cam was a dilhole. Right up to the point that she collapses the second they leave her room. Saved by the ship’s doctor Lynne gets life and Cam and Doug head off to pastures new, though it’s never stated where they go I’m gonna guess it’s not Europe, what with our child poisoning problem and all.

This is a good film, at times bordering on great. It’s paced well, the story grabs you and the acting is on point. Joseph Cotten is excellent as the over trusting and conflicted Cam and Jean Peters is both lovable and down right cold blooded as Lynne and as it clocks in at just over 76 minutes there is no excuse for anyone with even a passing interest in Film Noir not to check it out. 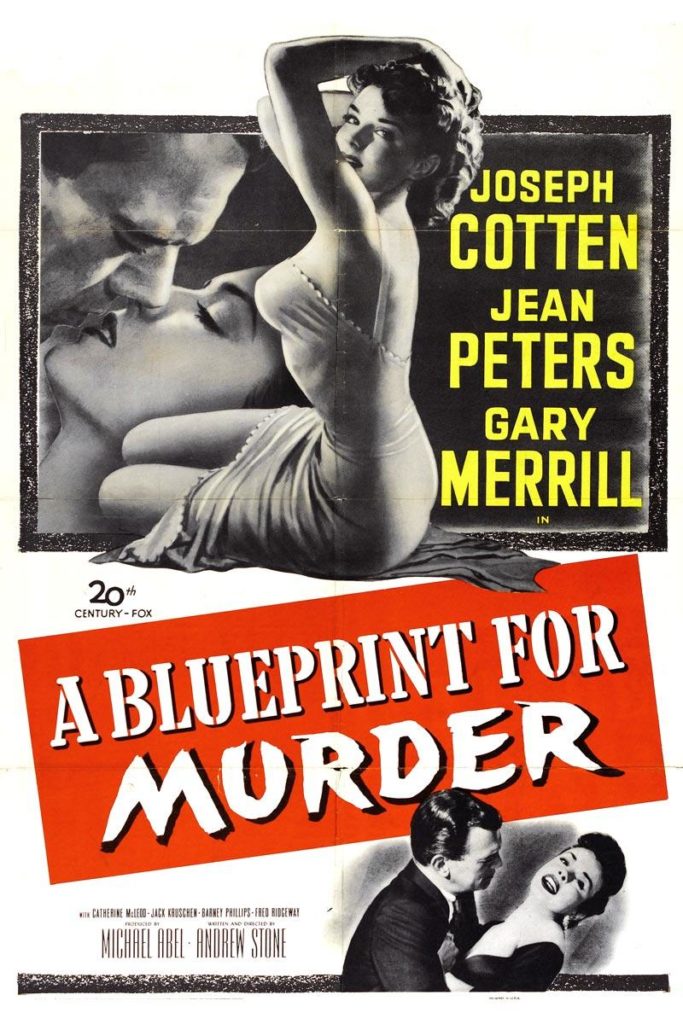