James William Guercio’s 1973 crime film ELECTRA GLIDE IN BLUE is one of those gems was mostly ignored upon its release but in recent years has been re-discovered by many film geeks. I first saw it late one night on TCM UNDERGROUND. I was always intrigued by the title which I had heard of years earlier, and when I watched it I wasn’t dissapointed.

The great Robert Blake (In Cold Blood, Tell Them Willie Boy Is Here) stars as John Wintergreen a Vietnam vet turned motorcycle cop in Arizona. Wintergreen is a very disciplined, ‘by the book’ kind of guy. He’s also ambitious and wants to be transferred to homicide so he can do some real police work instead of watching time fly by with his fellow copper Zipper (Billy Green Bush). When a local man suddenly dies under mysterious circumstances, Wintergreen is sure it was a murder, and sees his chance to become the assistant to big shot Detective Harve Poole (Mitchell Ryan). As Wintergreen tries to help solve the case, he finds himself falling out of favor with the cops and actually identifying more with the local hippies that are constantly being harassed.

The movie blurs the line between a classic police procedural and character study and blends late 60s counterculture films such as Easy Rider (note the quick visual reference in the trailer) with early 70s police dramas like The New Centurians and Dirty Harry. We get to see the point where Vietnam and the peace era turned into an atmosphere of bitter resentment, turmoil and confusion. In the modern socio-political climate, Electra Glide in Blue might be more relevant now than it ever was.

The cinematography by the legendary Conrad Hall is a main highlight. Guercio wanted to reproduce the look of films by John Ford (The Searchers) and made a deal with Hall that if he used that aesthetic for the outdoor scenes, he could film the interiors whichever way he wanted. The result is some really beautiful looking cinematography that melds the classic Western landscapes together with the modern mellow gold 70s backdrop.

Director Guercio was the producer of the rock band Chicago (who’s members Terry Kath, Peter Cetera, Lee Loughnane and Walter Parazaider appear in the film in small cameos) and wrote all the music for the film. The song “Tell Me” which plays over the haunting ending of the movie is sung by Kath, who accidentally shot himself in 1978. 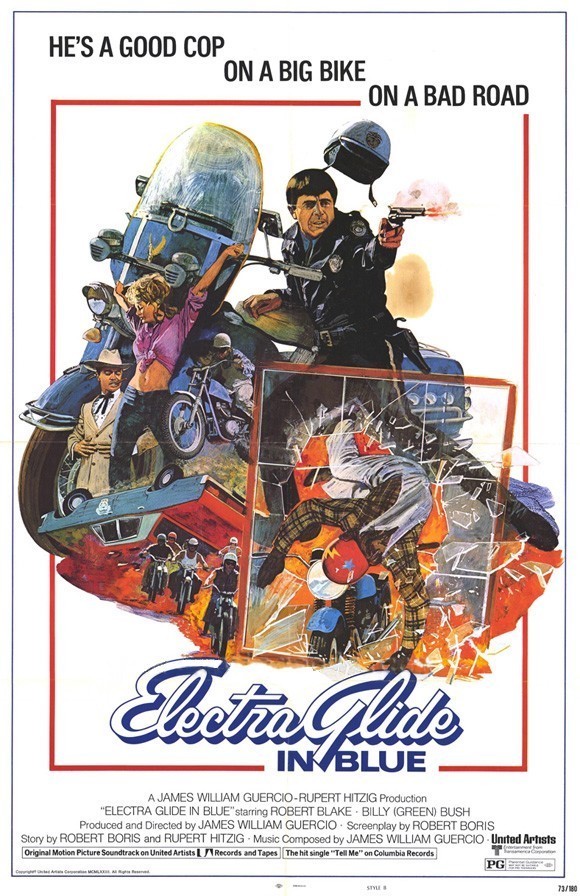