“When you side with a man, you stay with him, and if you can’t do that you’re like some animal!” – Pike Bishop

Sam Peckinpah’s 1969 masterpiece about the end of The Old West begins with a scene that was inspired by a story told to him by actor Emilio Fernandez (who plays Mapache) from his childhood in Mexico. We see a group of kids sitting around a small wooden corral. Inside there are thousands of red ants that are attacking two large scorpions. The youngsters watch on with a kind of sadistic glee as the sea of small insects devour the larger more powerful arachnids. This is a visual that will inform us about the film’s theme.

Riding by this macabre amusement is aging outlaw Pike Bishop (William Holden) and his bunch including: Dutch Engstrom (Ernest Borgnine), The Gorch Brothers, Tector (Ben Johnson) and Lyle (Warren Oates), Crazy Lee (Bo Hopkins) and the sole foreigner of the group: Angel (Jaime Sanchez) a Mexican. Right away we can see this Western is different because the men aren’t clad in dusters or wearing spurs, they’re incognito as military officers. The place they’re heading to is the town’s railroad office which holds a cache of silver. Of course, it’s gonna be their last big score and afterwards they’ll retire from a life of crime. What Bishop and the others don’t realize is that waiting to ambush them is Deke Thornton (Robert Ryan) an old friend of theirs who has been deputized as a reprieve for prison time and he’s got his own group of rough bounty hunters who are ready for anything.

When Angel catches Thornton outside the railroad office surrounding them on the rooftops they know they’ve got to fight to get out alive. A wild gun battle ensues and the townsfolk in the streets are caught right in the middle. Bullets rip through several people unassociated with this hostile standoff which occurs brutal, bloody and fast. A crucial bit of information is also shown to us here: Bishop has a chance to shoot Thornton but instead kills one of his men while Bishop in turn does the same. It is clear these two men have a connection that goes far beyond this mini war. In the first slow motion sequence we see a well to do citizen become a shredded casualty by being in the wrong place at the wrong time. Two of Thornton’s crew, Coffer (Strother Martin) and T.C. (L.Q. Jones) are like rabid vultures collecting anything worthwhile they can carry from the dead and arguing about who shot the most people.

After the bloody massacre in town, Bishop and the Bunch (except Crazy Lee who is stranded and later shot) are able to escape but one of the men who is wounded badly is executed on the trail. They make their way back to their rendezvous where the elder of their gang, the haggard, crotchety Freddie Sykes (Edmond O’Brien) is waiting. When they open up the sacks, they find nothing but washers (a decoy) and the men are gobsmacked. This little scene shows us exactly who they are, their different roles within the group and the ongoing conflicts they have. Yet what begins as an angry reaction soon turns to jokes and laughter. This is a reoccuring thing throughout the movie. We get a sense that as deadly as these men are, at heart they’re still like children playing cowboys and Indians. They also have a code of honor and seem to always revert back to a team after they’ve argued and bickered angrily. They are loyal to one another and know they’ve got to stick together to survive.

Desperate for another job and a place to hide out, the gang cross the Rio Grande into Mexico and head to Angel’s village where they find that the people have come under the wrath of General Mapache (Emilio Fernandez) a ruthless federale who has been stealing their food and women. Still, the men are welcomed by the villagers and enjoy their time, drinking, singing songs and getting some much needed relaxation. When they leave, the humble people sing a traditional farewell song, but this exit isn’t joyous, it’s rather ominous, and could almost be a funeral dirge.

Bishop decides to goto Agua Verde where Mapache resides with his men in a rustic fortress of debauchery. While there, Angel discovers his estranged girlfriend has become one of Mapache’s whores and he confronts her. When she shows that she’s turned her back on him by flirting with the General, Angel goes crazy with jealousy and shoots her. In turn, he is almost killed by Mapache’s men but Bishop intervenes by telling The General they’ll work for him by robbing a train carrying a load of U.S. Army weapons in exchange for some gold. Meanwhile, Thornton continues to give chase, ambushing the train where Bishop and the others are going to hijack the load of guns. Angel later betrays The Bunch when he steals some of the weaponry for his village and is left by Dutch at Mapache’s compound where he is tortured by his men. The scene of Angel being dragged behind a car is an interesting juxtaposition with the children watching the red ants and scorpions at the beginning of the movie. It also seems to be a representation of the Old West (Angel) being killed off by the modern age (the car).

The Bunch set up a delivery method for the guns as so they can’t be gypped since they don’t trust Mapache. While they are waiting to complete this transaction, they are nearly taken down by Deke and his hunters but are able to evade them. Old Sykes is injured and must hide out while the others head back to Agua Verde for refuge where they make an effort to get Angel back from Mapache. As the film’s theme of honor comes up once again we see the thing they hold most sacred is their loyalty to each other even in the face of death.

With The Wild Bunch, Sam Peckinpah’s visionary genius and personal interests merged and the result was one of the most influential action films ever made. The balletic yet shocking slow motion sequences it became famous for were inspired by both Arthur Penn’s Bonnie and Clyde (1967) and an episode of the 60s TV show Felony Squad edited by The Wild Bunch’s Lou Lombardo. Peckinpah expanded on that concept and turned it into his personal trademark as an auteur. While many saw this as an exploitive depiction to jolt audiences, Peckinpah’s true aim was to force people who were used to seeing the simple depictions of death in TV westerns, to get the effect of real excruciating agony in the extended deaths of certain characters. The use of rapid edits by Lombardo also heightened the impact of different scenes where violence may explode at any moment. Peckinpah loved the thrilling aspect of these scenes but also wanted to create a catharsis for audiences who were wrapped up in the horror and tragedy of The Vietnam War which was raging at the time. His plan ultimately didn’t work and instead it marked him as the director who loved to indulge in death. “Bloody Sam” would never be able to shake this largely incorrect view of his work.

The film’s master cinematographer Lucien Ballard brought yet another visual exuberance to the movie by employing the telephoto lense which was used to compress the onscreen images bringing objects in the foreground and background together. This can be seen most prominently when The Bunch are on their final walk to get Angel back from Mapache. Both the men and the residents of Agua Verde are moving in and around them are in sharp focus.

Although the film is known mostly for its graphic depictions of violence, at its core it is a tale about honor and loyalty among the friends. It is also about men who find themselves suddenly out of their element. Unlike most Westerns, the movie takes place in 1913 when America was undergoing dramatic industrial and social changes. All that remains of The Old West are a few outlaws like Bishop and his pals and even they know from seeing the fancy new automobiles at Mapache’s compound that the way of life they’re accustomed to is all but over. The rowdy atmosphere has changed so much they even go to Mexico, a place that is closer to what their lives were like in the previous century.

Throughout his career Sam worked in several genres (crime, war, espionage), but he clearly excelled in telling Western tales. That was the era he loved and knew most about which was why he was able to transfer his ideas into such glorious cinematic poetry. It’s almost as if he was from that time and he had the ability to create cinematic visions of that period with an authenticity and romance and give them a modern edge.

I think there are certain touchstones that make film fans fall in love with the medium of cinema. The special kinds of movies that stay with you and inspire you to watch more of them. The Wild Bunch is definitely one of those for me. 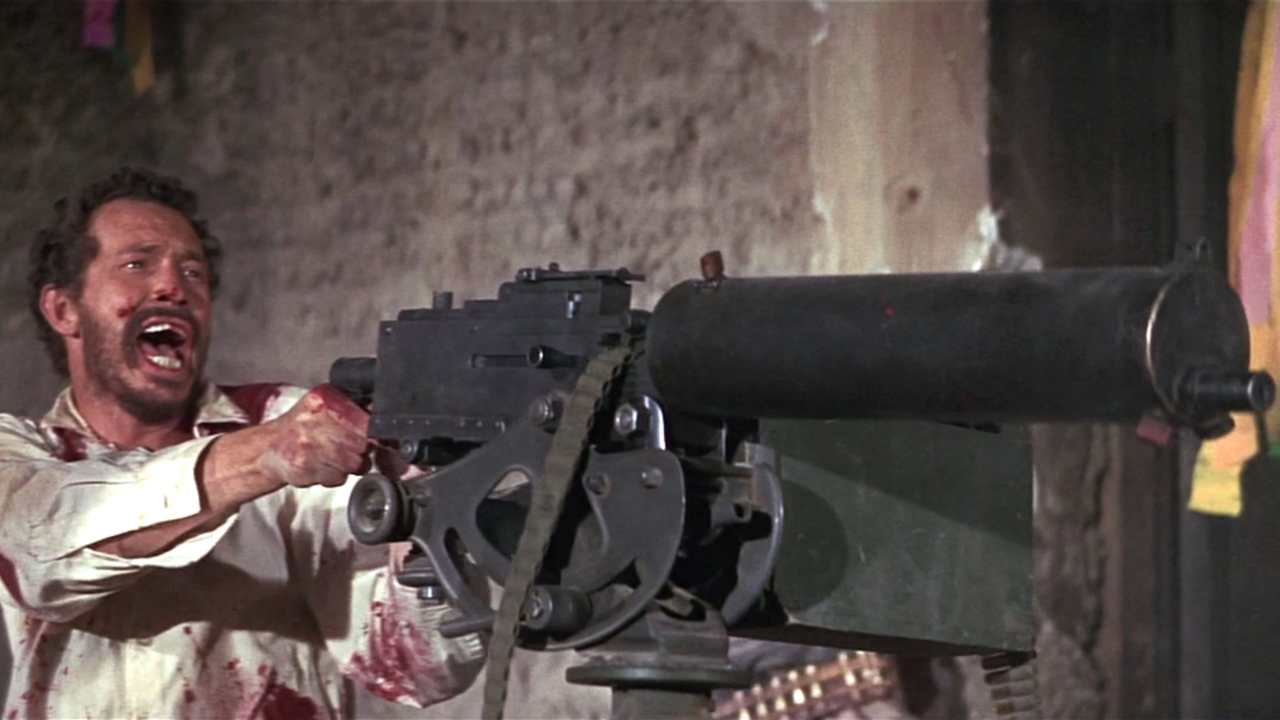 Video: Presented in (2:40:1) 1080p High Definition – Ive seen this film on TV and on DVD and this edition is by far the best it has looked. Transfer is gorgeous with deep picture clarity and rich, vibrant colors.

– The Wild Bunch: An Album in Montage – Rare behind the scenes footage of the production with voiceover quotes from the filmmaker as well as cast and crew.

– Excerpt from A Simple Adventure Story: Sam Peckinpah, Mexico and The Wild Bunch – A Then and Now comparitive view at the locations used in the movie featuring interviews with Peckinpah biographers David Weddle, Nick Redman and others.

Final Word: A must own for classic movie fans and Western aficionados. This hi-def special release of The Wild Bunch looks and sounds amazing. Highly Recommended!

BUY THE WILD BUNCH ON BLURAY 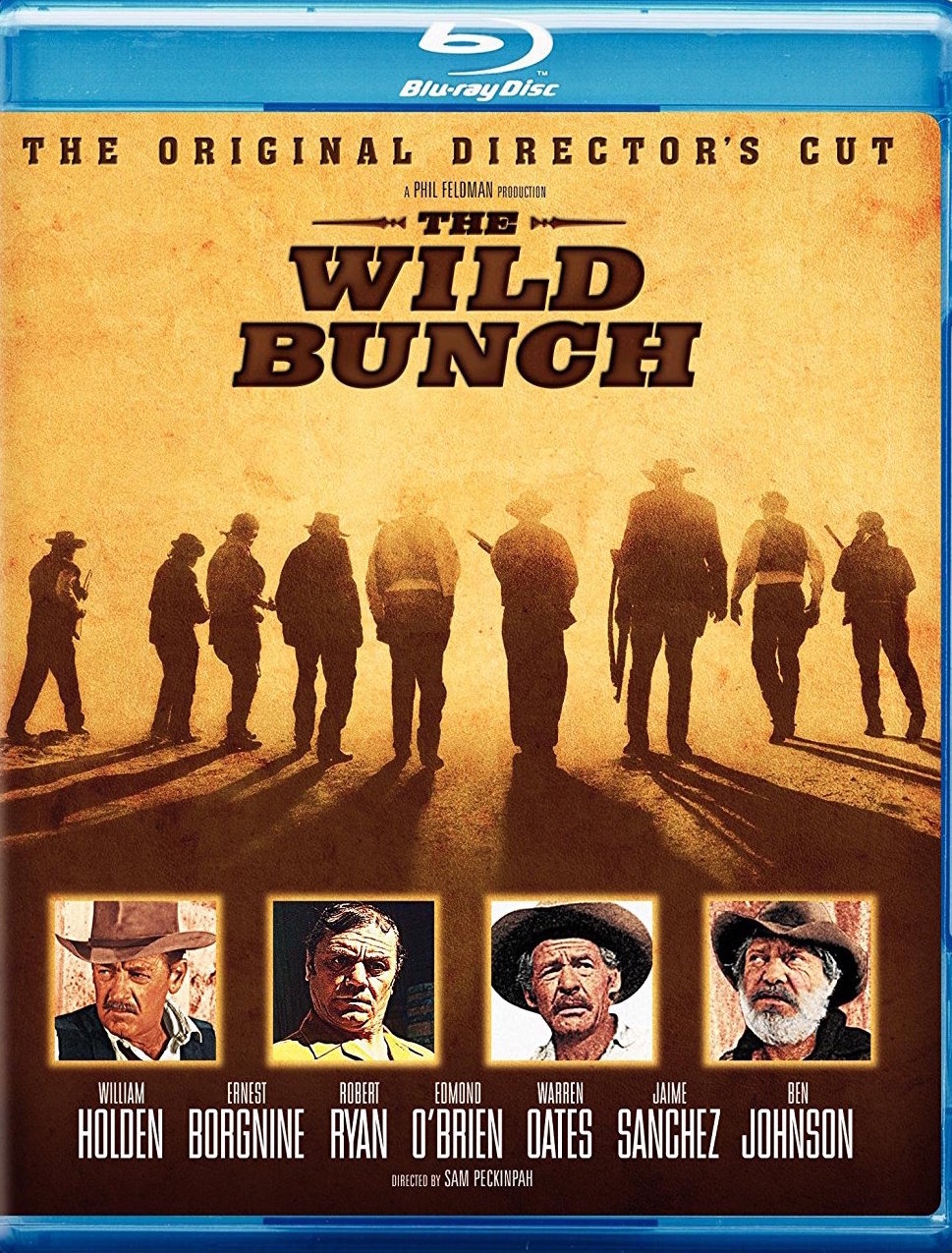