“I like to try to go back and develop pure visual storytelling. Because to me, it’s one of the most exciting aspects of making movies and almost a lost art at this point.” – Brian DePalma

Brian DePalma’s 1981 conspiracy thriller Blow Out is probably more than anything else a masterpiece of purely visual storytelling. The opening sequence itself is a trick on the audience in the form of a slasher parody of Halloween that the movies main character Jack Terry (John Travolta) is working on. He is a sound man for a low budget exploitation film studio in Philadelphia and his latest job is to help his producer/boss find the right female scream for the weak one that is holding up production of the C-horror movie entitled “Coed Frenzy”. He also needs to record some new natural sounds, so he ventures to the outskirts of of the city to get some. DePalma focuses on the high powered microphone Jack holds as it is picking up noises like: a frog, a couple talking nearby, an odd zipping noise and a hooting owl which is shown in a spectacular deep focus shot juxtaposed with Jack (two seemingly innocent creatures who aren’t aware of what’s coming at them). Suddenly, Jack picks up the approaching sound of a car barreling down the road and then a loud bang (the owl takes flight). The car crashes through the bridge and plunges into the water. Jacks first reaction is to dive into the cold river. He sees a woman struggling inside the submerged vehicle and proceeds to smash the window rescuing her from impending doom.

At the hospital Jack learns that the man driving the car was actually Senator Jack McRyan, a politician on the verge of the presidency. The girl with him was just some floozy that he picked up earlier that night. Jack is furiously encouraged by McRyan’s friend to keep quiet about what happened and forget all about it. When he introduces himself to Sally (Nancy Allen) the woman he saved, he can see she is a bit dim, but a sweet person. A tender piano theme by composer Pino Donaggio entitled Sally and Jack plays on the soundtrack reminding us that Travolta and Allen had previously worked together on DePalma’s hit Carrie. In that film they had a great onscreen chemistry (albeit different) which is continued here.

Jack’s obsession with with the car accident really begins as he keeps playing back the audio he recorded and notices something odd: he can hear a gunshot go off before the car’s tire is blown out. DePalma takes his use of split screen another step further with the sequence where Jack visualizes the actual gunshot going off and hitting the tire as if he’s right there when it occurs. Now that the wheels are turning, instead of working on the Coed Frenzy film with his producer, Jack gets more and more sidetracked. While watching the local news he finds out that there was actually another person at the bridge that night named Manny Karp (Dennis Franz) a photographer who took photos of the crash. Jack knows that something is rotten in Denmark. He gets a copy of the magazine which contains Karp’s frame by frame pictorial of the crash which he then uses to sync up with his own audio recording. His idea is to give them to police in hopes of uncovering who or what is behind this mysterious murder. DePalma shows in detail the process of mixing film and audio in an excellent technical sequence here.

As Jack is following any leads he can, Burke (John Lithgow) the shady, meticulous psycho behind McRyan’s murder is keeping tabs on both Jack and Sally. His first mission is to goto the police garage and make McRyan’s cars blown out tire dissapear (look close, theres a nice visual clue here when he opens his own car trunk which is connected to another great sequence in the film). Afterwards he begins trailing several different women (all who bare a striking resemblance to Sally) and murdering them. His last victim will be Sally herself as a way to make her death look random. We can see Burke isn’t interested in covering up anything as much as he just enjoys using it as an excuse to kill.

As Jack gets more and more caught up in his personal investigation, things begin to unravel, most notably his studio audio tapes which he discovers have suddenly been erased. DePalma uses a continuous 360 degree shot here to convey the out of control atmosphere as Jack rushes through his sound room, testing each tape and finding them all blank realizing he is in fact right, someone is out to stop anyone from bringing McRyan’s premeditated murder to the public eye. Jack knows noone cares about these things and in effect that is what Blow Out is all about, one man’s obsession with something that most people really aren’t interested in anyway. Jack’s own frantic pursuit of uncovering this mystery is what ultimately leads to all the death and destruction around him.

After seeing Blow Out many times over the years (one of my all time favorite movies), I think the reason it works so well is because of a few specific reasons: 1) It was shot in Philadelphia (note the red, white and blue color scheme which runs through the film) where DePalma grew up so he was already knowledgable about the area and the best places to film. 2) His own obsessions with the Kennedy assassination that inspired the fictional murder of McRyan. He studied the theorists and used them as a story point. 3) His love of two films: Antonioni’s Blow Up and Coppola’s The Conversation both films he has stated were direct influences on Blow Out, which is in effect his own contribution to the multimedia themed conspiracy trilogy. 4) His love of technical media devices (i.e. audio and visual equipment). In a bit of self reference, like Jack he was a science whiz in school. DePalma’s ability to bring all these personal elements together in an exciting, purely cinematic way is really what gives the film such a strong impact and unique quality that keeps it drawing in new admirers.

Blu Ray Video: Presented in its original aspect ratio of 2:40:1. The new transfer was supervised and approved by Director Brian DePalma. The digital transfer was created on a Scanity Datacine in 2K resolution from the original 35mm negative. Thousands of particles and debris were manually removed using MTI’s DRS system and Pixel Farm’s PFClean system. Digital Vision’s DVNR system was used for remove smaller particles and reduce noise reduction. The result is highly defined and every aspect of the film is enhanced a great deal from the initial regular DVD release.

Audio: The Dolby 2.0 surround track was remastered at 24 bit form from a 35mm magnetic track with Dolby A noise reduction. Unwanted noise was removed with Pro Tools HD. Crackle was fixed with AudioCube’s integrated workstation. The sound is at it’s highest quality with the new 2.0 mix. Fans will be thrilled to hear Pino Donaggio’s score and the sound FX in an all new clarity. NOTE TO VIEWERS: If you own a surround sound equipment make sure to enable Dolby Pro Logic to properly receive the Dolby 2.0 audio output.

Interview with Director Brian DePalma conducted by Noah Baumbach: An insightful interview with the iconic visual stylist who is probably one of the most misunderstood filmmakers in Hollywood. Noah Baumbach brings up many topics that shed a bright light on DePalma’s personal views on the art of making movies, reoccuring themes he enjoys and his feelings on modern directors (no names needed) that he thinks don’t use the medium correctly.

Video interview with co-star Nancy Allen: Nancy talks about creating her character Sally and the exciting experience of working on the film with co-star John Travolta. She also explains in more detail her reaction to the film’s reception and her view on how it wasn’t correctly promoted or marketed. You can tell Nancy is very proud of the film and considers it one of her best. (I strongly agree).

Interview with steadicam operator Garrett Brown: The inventor of one of cinema’s most ingenius and useful filmmaking tools shows how the special camera is operated and discusses working on Blow Out and his thoughts on moviemaking. (Excellent!)

On set photos by Louis Goldman 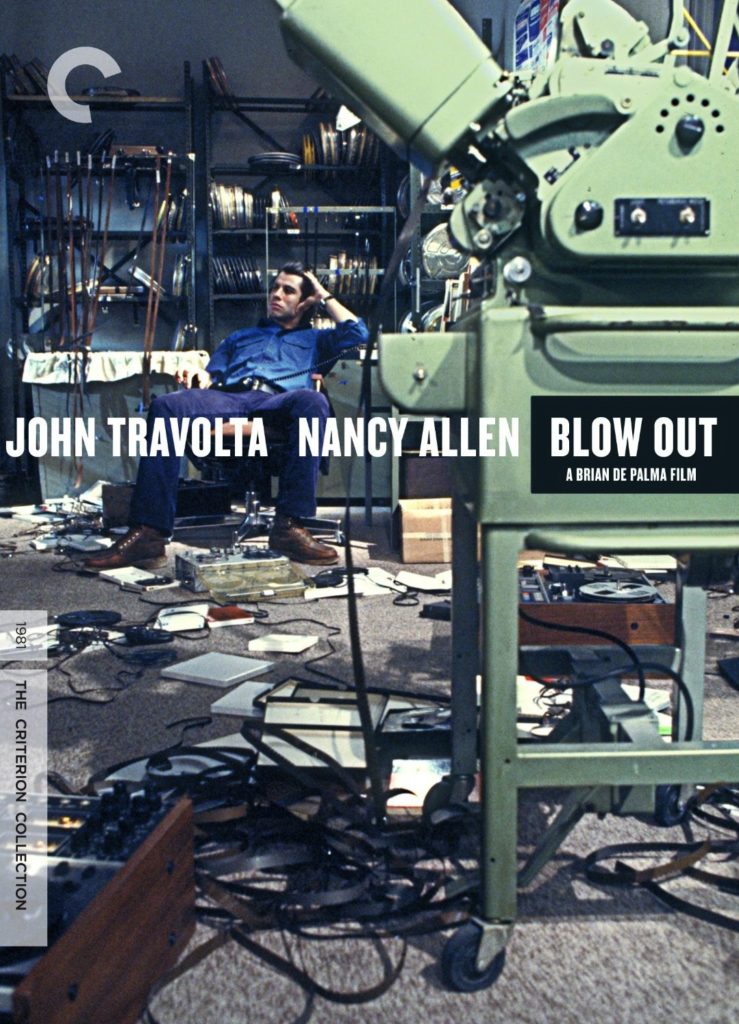